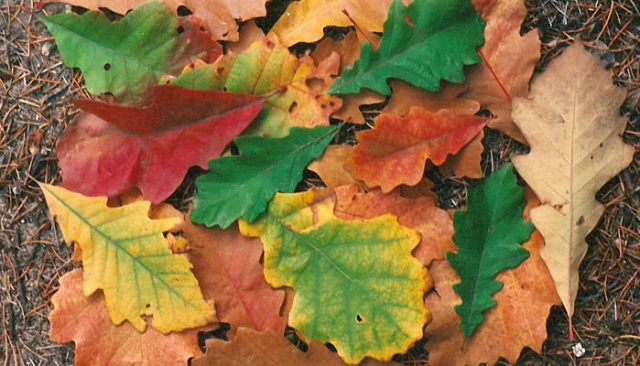 Most trees particularly in the northern hemisphere do their growing in the spring and summer. Their leaves are where the food for the tree is produced, via the process of photosynthesis. In photosynthesis, energy from sunlight is captured by the pigment chlorophyll, and used to convert carbon dioxide and water into oxygen and carbohydrates in the form of sugars and starch.

In this transformation the energy of the light absorbed is converted into chemical energy stored in the carbohydrates. It is this chemical energy that drives the biochemical reactions that produce flowers and seeds, and allows the plant to grow. Chlorophyll is contained in the cells of the leaves, and absorbs red and blue light, thus appearing green. It is the presence of large amounts of chlorophyll that is responsible for the overall green appearance of trees.

Chlorophyll is not a stable compound: strong sunlight will cause it to decompose. In order to maintain the level of chlorophyll in their leaves, trees have to continually synthesise it. This requires both sunlight and warm temperatures. During the summer months chlorophyll is continuously destroyed and regenerated in the leaves of trees.

Another pigment that is also found in leaves is carotene. This is the compound that gives carrots their distinctive colour. Carotene absorbs light in the blue-green and blue part of the spectrum, and thus has a yellow colour. When carotene and chlorophyll are both present, the overall leaf colour is green. When carotene absorbs light it passes on the absorbed energy to the chlorophyll, acting as an accessory absorber. Carotene is much more stable than chlorophyll and persists in the leaves even after all the chlorophyll has decomposed.

A further class of pigments can be found in leaves: the anthocyanins. These absorb blue, blue-green and green light. Thus leaves that contain anthocyanins will appear red. Both chlorophyll and carotene are found in structures of the cell called chloroplasts. Anthocyanins are not attached to cells but are dissolved in the cell sap, and their colour is sensitive to the pH of the sap. If it is quite acidic, the pigments will have a bright red colour. If the sap is more alkaline they will be more purple. Anthocyanins are responsible for the red colour of apples and also of grapes. They are formed by the reaction between sugars and proteins in the sap, in the presence of sunlight.

As the concentration of sugars rises in the leaf sap, they may react to form anthocyanins. Formation of these pigments causes the leaf to turn from yellow to red. Examples of the trees whose leaves turn red in autumn are: red maples, red oaks and sumac. Trees that have carotenes but no anthocyanins will display yellow colours in their leaves. The brightest autumn colours are produced when cool dry nights follow dry, sunny days.

A few regions of the world have very showy displays in the autumn. In the Eastern part of North America there are large swathes of forest with broad-leaved trees, and weather conditions suitable for producing very vivid colours. South western Europe also produces spectacular displays.

Toxicology and Forensic Investigation of Death

Functions and Structure of Ribosomes