Piscis Austrinus has one very bright star: Fomalhaut. Fomalhaut, also known as Alpha Piscis Austrini, is magnitude 1.17 and lies 25 light-years away. Its name means the “Mouth of the Fish” and it is the 18th brightest star in the sky. It is a white, A-type star.

In the farthest southeastern corner of the constellation boundary is a star that is known by a few names, including Lacaille 9352 and GSC 7512:12363. Lacaille is unremarkable visually at magnitude 7.3, but it is one of the closest stars to the Sun at 11 light-years away. The red dwarf is also notable in its proper motion. As one of the fastest-moving stars known, it travels at approximately 75 miles per second.

The galaxies in Piscis Austrinus are all very faint. One of the “brightest” of these faint fuzzies is NGC 7314, a spiral galaxy at magnitude 10.9.

Facts about Grus the Crane

Grus is located adjacent to Piscis Austrinus, on the opposite side of Capricornus and Aquarius and therefore farther in the domain of Southern Hemisphere observers. Grus could be viewed as crane shaped by its long body and curving neck with two starry extensions for wings.

Like Piscis Austrinus, Grus has no good deep-sky observing targets for anyone with modest observing equipment. The best option in Grus is to focus on the brightest star in the constellation, Al Nair. Putting this star in the field of view of a telescope will also include a dim magnitude-10.5 galaxy just 16 arcminutes away. 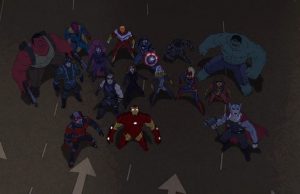 Entertainment
DC movies produced by Fox and Warner Bros. are considered to be the king of the animated world. Marvel remains on top...