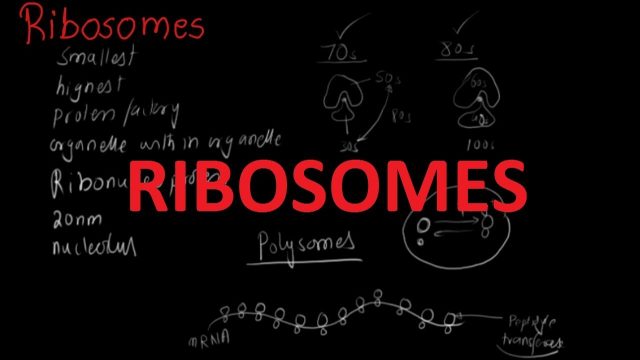 Ribosomes are small organelles made of RNA and protein that carry out the important work of translating mRNA templates into proteins.

Ribosomes in eukaryotes are made up of two subunits, a large subunit, called 60-S, and a small subunit, named 40-S. In prokaryotes, the subunits are 50-S and 30-S.

The function of ribosomes is to make proteins in a process called protein synthesis. The ribosomes combine amino acids, the building blocks of proteins, in the order specified by a messenger RNA (mRNA) template.

As the ribosome moves along the mRNA and reads the sequence, amino acids are attached to and organized by transfer RNA (tRNA), a special type of RNA that can bind to both the ribosome and amino acids.

Location of Ribosomes in the Cell – Free and Attached Ribosomes

Ribosomes come in two types, free ribosomes and membrane bound ribosomes, which can be found in different places within the cell and carry out slightly different versions of protein synthesis.

Membrane bound ribosomes, also called attached ribosomes, attach to the endoplasmic reticulum, creating rough endoplasmic reticulum, RER. These rough ER ribosomes make proteins that will be exported for use outside the cell or used in cell membranes. The proteins generated by ribosomes in the rough ER travel into the ER and are then packaged for transport to the plasma membrane to be incorporated there or sent outside the cell.

Ribosomes are capable of chaning between one type and another. Free ribosomes can become membrane-bound ribosomes and vice-versa depending on what the cell needs at any given time.

It is important for students of biology to understand the function and structure of ribosomes, since these important organelles carry out the steps of protein synthesis that create all of the proteins in the body. Without ribosomes, there would be no protein construction and no work could ever get done inside or out of the cell.

A Survival Kit — Knowing What to Include in It