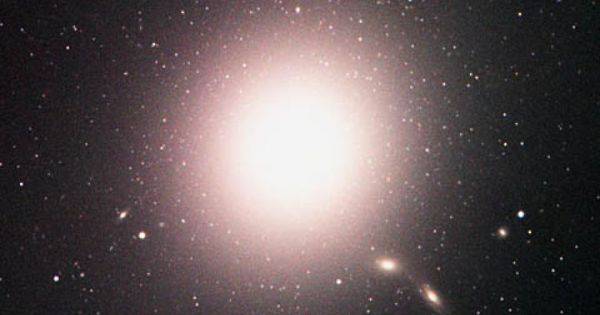 The Virgo Cluster of galaxies is home to more than 2,000 galaxies and the nearest galalxy is the giant M87, the heart and possibly most dominant member of the cluster.

M87 is found in the constellation Virgo near the border with Coma Berenices. It follows Leo the Lion as they trace a path across the night sky. M87 shines at magnitude 8.6 and is therefore fairly easy to detect in any telescope and even in some binoculars. M87 lies about 60 million light-years away. Its spherical clump of stars extends approximately a half million light-years across, about five times the size of the Milky Way’s diameter. The diameter of the galaxy’s halo, however, is about a million light-years, and while that is large, astronomers expected it to be even larger. They believe something cut the halo off early on in its formation.

Due to M87’s size and location among many other galaxies, it is no surprise that M87 is home to the largest known number of globular clusters. In comparison, the Milky Way has about 200 globulars, while M87 has thousands. These clusters may be dwarf galaxies that were sucked in by the galaxy’s gravitation. The globular clusters are best seen on long exposure photographs.

M87’s jet is probably its most characteristic feature. The jet extends outward from the core for thousands of light-years. The source of this jet is a monster black hole at the galaxy’s core. The jet was first discovered in 1918 and since then it has flared a number of times. The knots of plasma have brightened, dimmed, and brightened again.

Due to M87’s large size and elliptical shape, it is probably the result of past galactic mergers. Being located near the heart of the Virgo Cluster means that the galaxy will also experiences more collisions in the future.

The galaxy M86, just over a degree to the west, will most likely be one of M87’s first targets. The two should become one in the next couple billion years. M86 can also be found with a telescope close to M87. M86 is a bit dimmer, at magnitude 9.19. M86 is a lenticular-type galaxy. It exhibits the highest blueshift of any Messier object, meaning that it is moving toward the Earth (and our solar system and galaxy) faster than any other object, at 419 kilometers a second. The Milky Way is also a part of the Virgo Cluster. 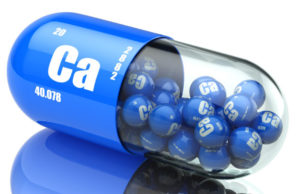 Food
It is usually believed calcium pills can protect the bones, but a new study has failed to agree with the common theory. Researchers say...