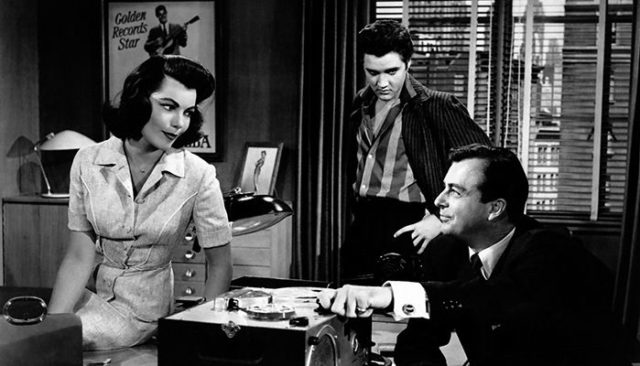 An underrated actress and genuine beauty, Mary Astor today is best known for playing the sexy, two-faced villainess Brigid O’Shaughnessy in The Maltese Falcon. But Astor proved she was much more than just a movie femme fatale.

Astor began her screen career as an ingénue, graduating to more diverse, nuanced roles. In many roles, she projected a keen intelligence, humanity and sophisticated aura not often seen in female characters of the day. Physically, she was blessed with large, expressive eyes, a sculpted, angular face, a full, throaty voice and an aristocratic bearing.

While she enjoyed a memorable screen career, Astor’s personal life was a mess, starting with a troubled relationship with manipulative, brutally strict stage parents.

At 14, the family moved to Chicago, where Lucile began studying acting and appearing in amateur stage productions. The Langhankes soon moved to New York, where Lucile’s controlling stage parents sought the attention of the movie industry.

Paramount signed her to a six-month contract. Little came of it, except for a stage name reportedly cooked up by studio chief Jesse Lasky, gossip columnist Louella Parsons and producer Walter Wanger.

When the Paramount contract lapsed, Astor freelanced a few minor screen roles, then moved to Hollywood in 1923. Within a year, the 18-year-old was co-starring in Beau Brummel with no less than John Barrymore, who became infatuated with the coltish beauty after seeing her in a magazine.

A romance developed, one they couldn’t keep from Astor’s controlling parents. But it foundered, partly because the 42-year-old superstar and notorious roué was also seeing another young actress, 21-year-old Dolores Costello, whom he subsequently married.

Beau Brummel made Mary Astor a hot ticket in Hollywood. And while she soon was earning $2,500 a week, Astor’s parents (with whom she lived) had her on a $5 a week allowance! In a memoir, Astor wrote she was so frustrated she escaped the family home in the Hollywood Hills by literally climbing out a window and taking refuge at a hotel.

A rapprochement included Astor’s right to go to the studio unescorted by her mother, plus access to a $500 bank account. Meantime, the Langhawkes controlled all of their daughter’s earnings until 1932, when she was 26. When the star finally took the reins of her own finances, her parents sued her for support. A settlement had Astor paying them $100 a month.

Astor’s Paramount contract ended in 1925. She signed with Warners, where she was reunited her with John Barrymore for Don Juan. Warners loaned her to Fox for a pair of pictures – where she liked it enough sign with Fox for $3,750 a week after the Warners deal ended.

In 1928, Astor married neophyte director Kenneth Hawks, the brother of celebrated director Howard Hawks. By this point, talkies had fully arrived — but Astor’s voice was wrongly believed to be too deep for sound pictures. Fox dropped her in 1929.

The actress picked herself up, took voice lessons and performed in a Los Angeles stage production with close friend Florence Eldridge, the wife of actor Fredric March. If anything, the production proved Astor’s voice was more than suitable for pictures.

But during the production, Kenneth Hawks was killed over the Pacific while shooting sequences for a movie. After just two years of marriage, Astor was a widow.

Soon after, in 1930, she made the successful transition to sound films. But Hawks’ tragic death haunted the 24-year-old and, after making several more films in rapid succession, she suffered a nervous breakdown. Astor recuperated under the care of a doctor named Franklyn Thorpe. They grew close and married in the early summer of 1931.

The Thorpes welcomed a daughter, Marylyn, almost exactly a year later, when Astor gave birth two months premature during an Hawaiian vacation. But the newborn could not solve what apparently was a troubled marriage.

Professionally, Astor’s star was rising, thanks to juicy roles in Red Dust with Gable and Harlow, and The Kennel Murder Case, opposite William Powell in a detective role that pre-dated The Thin Man (link) series.

But life at home was grim. In 1933, Astor vacationed alone in New York. There, she met and began a 16-month affair with brainy Broadway playwright and screenwriter George S. Kaufman. Astor made the mistake of documenting the passionate affair in a diary. The account made lurid nationwide headlines three years later, during a post-divorce custody battle over Marylyn.

When the notorious diary was read in open court, Americans heard such casual confessions as, “I don’t know where George got his staying power,” “Ah, desert night – with George’s body plunging into mine, naked under the stars…” and “We shared our fourth climax at dawn.”

Later in life she described him as “the kind of man I’d go over a cliff for.”

During the trial, Astor and Walter Huston were shooting what was destined to become a classic, Dodsworth, based on the novel by Sinclair Lewis. Producer Samuel Goldwyn faced pressure to replace her, but stuck by his star. Astor delivered a naturalistic, sympathetic, luminous performance as a free-spirited American expatriate who falls for the unhappily married Huston.

That she could deliver such a fully realized performance in the midst of the humiliating custody trial is testament to Astor’s talent. The film was a hit and Astor’s reputation was surprisingly undamaged, despite the diary’s racy revelations.

But the real trials of Mary Astor’s life were just beginning.