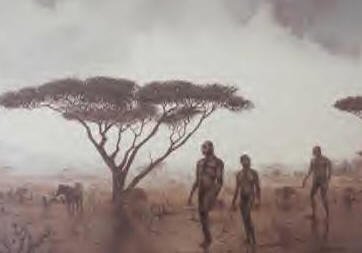 The Great Apes seem to be our closest relatives and it is thought that our ancestors separated from their line several million years ago. A number of now extinct apes developed bipedalism (walking upright on two legs), as did our own ancestors. It was obviously to their advantage – obvious because they survived for a long time – but the question is: “What was the initial advantage of leaving the trees and walking on two legs?” There are two main theories.

When the African climate began to change (several million years ago), savannah grassland started to replace much of the ancient equatorial forest. As this new habitat developed it provided a place where an ape could prosper if it “came down from the trees”. Why it might have been an advantage for such an ape to walk on its hind legs is unclear, and theories include those which suggest that presenting the smallest surface possible (the head) to the midday sun was crucial, and others which stress the ability to see further and thus become aware of the approach of predators much more quickly.

It is never going to be possible to be certain why some species of ape adopted bipedalism, but it ought to be possible to find out when and where it first happened. Fossil bones can be studied and dated, and associated fossil remains can establish what the environment was like. The conditions that favour the fossilizations of the remains of a dead animal are very good along the sea shore, and relatively poor on open grassland. To date there is no fossil evidence from coastal deposits, and the only information we have comes from the savannah.

Once apes had developed their ability to walk upright out on the savannahs of Africa (for whatever reasons) it is possible that our ancestors might have found life beside the sea provided rich pickings. Theories suggesting that adapting to a life on the coast was the original reason for our bipedalism date this event to around 6 million years ago, while those which have two legged apes adapting first to the grasslands and then later adopting an aquatic habit use a date of around 2.5 million years.

Whatever happened in the past it is true that there now is an ape that enters and exploits the sea. In the past it took many generations for animals to move into new environments because they had to wait for genes, and with them anatomy and behaviour, to change. Now, by exploiting modern technology, modern humans are truly becoming “Aquatic Apes”.