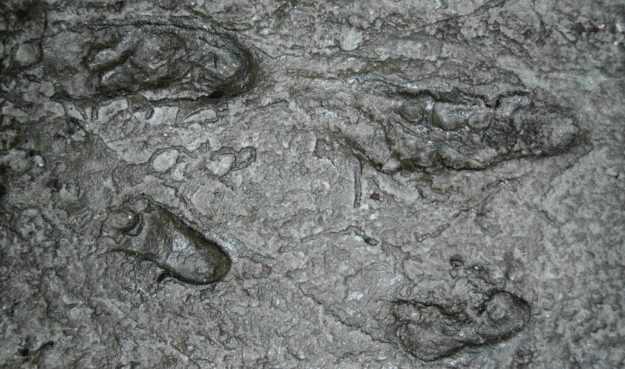 When the hominids of the Hominini tribe started walking on two legs their world changed. There are many theories as to why or how bipedalism evolved. The different hypotheses focus on feeding, behavioral and climatic conditions that made bipedalism possible. An overview of these theories is presented in Roger Lewin’s Human Evolution (Blackwell, 2005). Reasons for this major evolutionary milestone include:

Indeed bipedalism was a major step in hominid evolution for it gave early man increased mobility freeing his hands for other uses (manipulation). It also improved early man survival and detection of food resources (raised head improved danger detection and made for more efficient hunting or scavenging). Physical differences between men and women are also seen as a result of bipedalism. Fossil footprints are a “precious window” as to how Homo erectus walked.

What are Fossil Footprints?

Tracks made by animals or hominids are preserved by a combination of events. The process is described in Stephen Tomkins, The Origins of Humankind (Cambridge U. Press, 1998): A volcano erupts covering the landscape with lava ash; shorty after, lava ash is turned into cement-like ash by rain; birds and mammals mark it with their footprints; more ash falls from the volcano sealing the footprints. After millions of years erosion uncovers the prints. The greatest discovery in the history of hominid evolution are the Laetoli fossil footprints found by the team of Mary Leakey in Tanzania in 1976.

The Laetoli fossil footprints, a major discovery for the history of hominid evolution and bipedalism, are the oldest hominid tracks. They are at least 3.6 million years old and the earliest evidence for bipedal walking. They come from a hominid, perhaps a female carrying an infant, whose body structure is very similar to a modern human’s.

Want to Know What Direct Education is Going in? Look Towards...