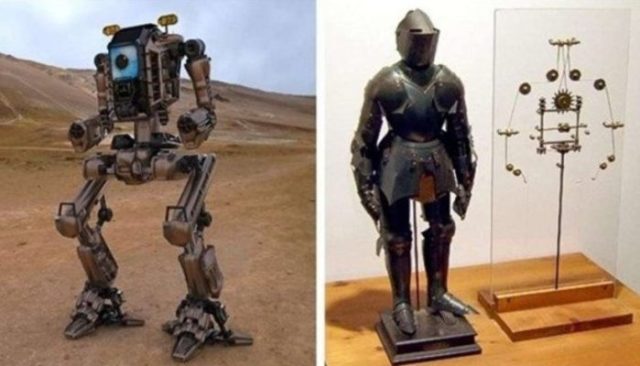 Leonardo da Vinci is a legendary member of the Renaissance of music, art and science that took place in Europe about 500 years ago. A contemporary of Michelangelo, Leonardo da Vinci was an accomplished artist, with noted successes in painting and sculpting. Leonardo da Vinci was also an incredibly talented inventor, and he created a design for a mechanical knight that was powered by non-human means.

The mechanical knight was designed to look like a contemporary knight. It wore full armor, including a helmet, and was proportioned to look and move like a human. Da Vinci’s knight even carried a sword. The knight robot made all movements to the beat of a drum, which could play different beats, depending on the cylinder used, and could accomplish the following actions:

Waving – The robot was able to move its arms and legs to wave.
Sitting up – The mechanical knight had the capability of sitting up and lying down.
Walking – Cables and pulleys allowed the robot to make walking movements.
Appearing to speak – Da Vinci’s robot could open and shut its jaw.

How Did the Automated Knight Work?

According to Michael Moran, in his article The da Vinci Robot, the mechanical knight had two systems devoted to independent movement. One system operated the angles, knees and hips, while the other moved the shoulders, elbows, wrists and hands. A programmable cylinder in the chest powered the movements of the arms, while an external crank powered the legs. In essence, the knight operated like a sophisticated automated puppet.

Leonardo da Vinci’s drawings and plans for the automated knight have been interpreted by scientists and robotics experts, allowing models to be created in the image of da Vinci’s robot. A model of the automated knight can be found at various museums and traveling exhibits, including the Museum of Science and Industry, in Chicago, Illinois.