The world is seeing mind-numbing technological advancements on a daily basis. Similarly, Virtual Reality has been gaining a large amount of popularity all over the globe recently. New VR headsets are being launched in the market every day, each one of them bringing something new to the table and claiming to be the best VR headset.

When the competition is this high, getting noticeable attention and limelight is undoubtedly difficult for the manufacturers. Moreover, as a consumer, choosing the right VR headset could be a tiresome task too. But you don’t need to worry, as no matter what your VR needs are, we have some suitable recommendations to share.

We have conducted thorough research and tested most of these VR headsets before suggesting them. So, without wasting much time, let’s talk about our first pick.

These are two different VR headsets by a company named Oculus. Out of these two, the Oculus Rift S was one of the first headsets that gained widespread popularity in the VR industry. Since then, it has been continuously updated to remain at the top.

The Oculus Rift S is a tethered Oculus headset connected to your Computer over DisplayPort that provides you easy access to the full range of new and exciting VR games StreamVR and Oculus Store.

In addition, it has a pair of outward-looking cameras for the purpose of motion tracking, in the place of typical external cameras, which reduces the number of annoying cables to deal with.

On the other hand, the Oculus Quest is a comprehensive and inclusive VR headset that focuses on functioning without much integration with a gaming PC. Resultantly, it is nearly not as powerful as the Rift S, but it does come with a powerful Snapdragon 835 processor.

This VR handset also doesn’t mess up with those arrogant cable wires due to the inbuilt 6DOF motion tracking with dual motion controllers, identical to the Oculus Rift S.

Sony is not a new company in the video gaming industry. It is up there with veteran companies like Microsoft and Nintendo. Resultantly, the Sony PlayStation VR was already welcomed with a great deal of enthusiasm and excitement upon its launch.

To immerse in the revolutionary gaming experience, all you need is a PlayStation Camera, Play station 4, and this headset.

It is highly recommended to invest in the Sony PlayStation VR if you already have a PlayStation 4 as there is a large number of exciting VR games available to play using the headset like Five Nights at Freddie’s: Help Wanted, Until Dawn: Rush of Blood, Rez Infinite, and Moss.

Also, you do not even motion control as most PlayStation VR games work with the DualShock 4, while this may sound like a straight benefit, the reality is the opposite. This VR headset uses the PlayStation move wands that are related to the old PlayStation 3 timeline.

Due to this, it is natural that the motion control is nowhere as good as the Oculus Rift. Moreover, the headset could be a little expensive due to this, as they are not always part of the Sony Playstation VR bundles.

The HTC Vive Cosmos is a direct upgrade of the Vive headset, ditching the old external base stations with outward-looking cameras for the purpose of motion tracking and packing a higher resolution.

Overall, the HTC Vive Cosmos performance is at the same level as the Oculus Rift, but this headset is available at $699, which makes them a little costlier than the Oculus Rift headset.

Moving over from the price constraint, if you are looking for even better motion tracking, you could try using Vive Cosmos Elite that uses an advanced method of following your head and tracking your motions. It does so by bringing back the external base stations for this purpose.

As you may have guessed, the HTC Vive Cosmos Elite costs $200 more than the original VR headset. Moreover, this headset functions with SteamVR also with its own dedicated VR software store that makes this headset even more similar to the Oculus Rift.

If you think that the HTC Vive Cosmos is an expensive buy at $699, the next pick may be a little uncomfortable for you.

Valve’s very own PC-tethered VR headset, Valve Index, costs only $499 if you only but the headset. Unfortunately, you will need to buy some additional items to make it work, and if you do not already have those, the overall price could rack up to $999.

We will admit that, if you do not have additional items on you, the total price may be obnoxious. Even though the Valve Index offers an impressive refresh rate up to 120Hz that is easily the highest among its peers and an advanced grip system on the controllers, the price remains a huge deal for most gamers.

If you previously had HTC Vive headset, you can use its base stations to cut the price down to $749, which is a huge price deduction, in our opinion.

The Valve Index is relatable new in the industry, and we have not yet tested the VR headset.

When the concept of VR was first discovered, markets were flooded with phone-based VR Headsets. These gadgets use your smartphone as both the display and operator of the system. Companies that made it big in this market were Google and Samsung, with Google Cardboard and the Samsung Gear VR.

These products were very cheap as they were priced under $150 and were heavily advertised to provide the best possible VR experience at that price range.

As the market became more curious and advanced, these low-quality fixes lost their charm. Google has already stopped putting our more headsets, while Samsung has also not updated its Gear VR since the launch of the Galaxy S9.

Even though the big players have left the run, there is a large number of Phone-VR headsets available in the market at exceptionally low prices.

Virtual Reality is, without a doubt, the next big thing in the Video Gaming industry. Although the best VR headsets in the market may cost a bit too much, we are confident that due to advancements in technology, these VR headsets will lose their demand courtesy of new and improved VR headsets that will lower down their costs.

Did you find the answers to all your queries? If not, please drop any unaddressed questions that you may have regarding VR headsets in the comment section below. We promise to hit you back instantly. 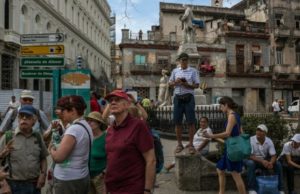 Lifestyle
The latest trend in travel is to tack on "tourism" to previously-unadorned terms. We've seen the growth of "un-tourism", "ecotourism", and now "voluntourism" has...