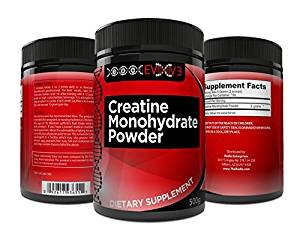 Creatine is an amino acid produced in the liver, kidney and pancreas from two other amino acids, arginine and glycine. Creatine is also found in foods, primarily meats and fish. Creatine, in the form of creatine monohydrate, was first used to improve athletic performance in 1993 and its popularity among athletes has grown ever since. In fact, a 1997 study found that 13% of all college athletes had used creatine within the past year.

Creatine is probably one of the ergogenic aids that have been studied most extensively.

Creatine is stored in the muscles and supplementation is hypothesized to add to this, allowing for faster recovery and regeneration of ATP after exercise. This is beneficial for athletes involved in activities such as jumping and sprinting where short, high intensity bursts of energy lasting up to 5 or 10 seconds are needed. Interestingly enough, researchers have found no benefit in women, suggesting that creatine effectiveness as an ergogenic aid may be gender-specific. Supplementation is not useful in activities dependent upon aerobic respiration such as long-distance running or cycling.

In a roundtable discussion conducted as part of the Sports Science Library of the Gatorade Sports Science Institute, Dr. EO Prentice of the University of North Carolina stated that “creatine is hands down, the most popular supplement used by collegiate athletes particularly those competing in football, wrestling, track and field and swimming.” Sports medicine expert Dr. Randy Eichinger from the University of Oklahoma believes that athletes seeking to gain muscle mass turn to creatine as well as protein supplements most often. Both of these professionals are of the opinion that athletes are given far too much encouragement to take dietary supplements, as the advantages are relatively small, if any. This slight advantage may be useful for competitive athletes, but for recreational athletes diet and training play a much bigger role in performance. Sadly, it is all too common a belief that dietary supplements provide all the nutrition needed, completely overshadowing the importance of a nutritious diet.

Side effects – When taken in appropriate doses, side effects from creatine are rare; however, anecdotal reports of muscle cramping,diarrhea and dehydration have been noted. Because creatine does promote water retention in muscle tissue, a slight weight gain may result from taking creatine. There is very little known about the long term side effects of creatine, aside from some evidence that kidney or cardiovascular problems could occur at high doses or when creatine was taken long-term.

Safety – Based on the large volume of studies which have been done, creatine appears to be quite safe, however most research subjects have been healthy young males. Whether or not similar findings are found indifferent populations can only be considered speculative.

Dosage – Creatine can be safely taken in amounts not exceeding 5 g daily for 4 weeks. Higher doses can be given if quicker storage is desired. It is also theorized that creatine storage increases faster when it is taken with carbohydrates. Hydration is an important issue to consider when taking creatine. At least 8 cups of water per day is recommended.

Reliability – The most effective creatine supplements are found in a powder-containing capsule or tablet. Creatine is not stable in water, so it is highly unlikely that any liquid supplements are reputable.