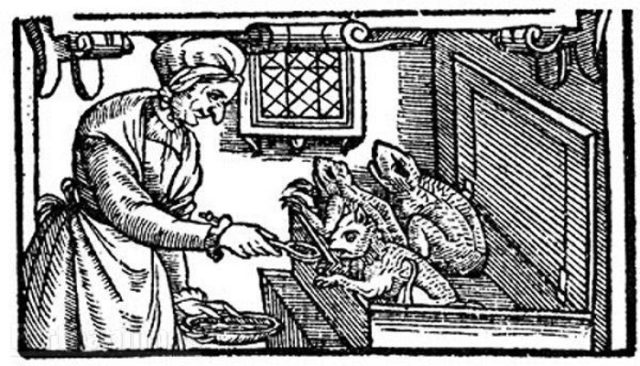 Every year during the period of Advent, the townspeople of Gelnhausen, in Hesse Germany, celebrate a mythical past built on Grimm’s fairy tales and other stories that, in some cases, hearken back to pre-Christian days. Europeans still follow superstitions and traditions as old as early pagan civilization, later imbued with Catholicism. On February 5th, people still bake “Agatha bread,” blessed bread honoring St. Agatha. In Northern German, people eat kale for good luck in the New Year while in parts of Spain people eat twelve grapes, one for each month of the year, in order to ensure good luck. “Good luck” and “blessed” foods are rooted in Europe’s medieval blend of magic, superstition, and Christianity.

Andrew Greeley writes that midwives were often permitted to baptize new born infants in the absence of priests. Often unaware of the sacramental particulars, they baptized “in the name of Caspar, Melchior, and Balthasar,” referring to the legendary three kings that brought gifts to the baby Jesus. The primitive allusion is not lost. No doubt midwives, often the communities’ “cunning” women – later dubbed witches, associated the sacrament with the three men that were most visible at Christ’s birth.

In another source, Greeley states that, “Until the last century, the Irish used to make love in the fields outside a house where there was a wake and thus asserted that life was stronger than death.” Scholars of the pre-Christian period in Europe point out that similar activity took place among the so-called barbarians on North Germany in December. Making love under fir trees was tied to good harvests in the next year, the fir tree being the forerunner of today’s decorated Christmas tree.

Gerald Strauss analyzed 16th Century Lutheran “Visitation Reports” and found that despite the best efforts of Lutheran pastors, local superstitions prevailed and, in many cases, existed side by side with religious teachings. Greeley questions the extent of any “Christian” lifestyle among Europe’s peasants into the 20th century. Using the example of the St. Christopher medal, he notes that still today people rely on a blend of superstition and religious sacramentals.

Every major Christian holiday, from Christmas to Easter, has roots in old pagan traditions and beliefs. R. W. Scribner details the Christian medieval Church cycle around which European peasant life revolved. Official feast days of the saints ranged from 50 to 100, depending upon the diocese. It all began on September 29th with the feast of St. Michael and followed the farming year.

Christmas fell during the old Roman and pagan celebrations of the winter solstice. It was a time of carnival and revelry that featured “Lords of misrule” and “boy bishops” – a practice recently revived in both the Catholic and Lutheran churches.

The use of candles as protective magic is well documented. Candles during the medieval period were blessed on February 2nd, the feast of the Purification of the Virgin, also known as Candlemas. Large house candles were used to ward off evil spirits or lit at times of death. Slim, red candles were used during child birth to protect against demons and other threatening spirits. Crosses made from wax blessed at Candlemas were placed on farm equipment and barns.

The 21st century still looks back to an earlier period when fearful peasants, with the help of the church, contrived symbols and sacramental aids to overcome everyday problems. Greeley asks, “to what extent…was the rosary a reminder of the mysteries of the life of Jesus and to what extent was it a good luck charm?” Ultimately, in terms of faith, it may not matter.