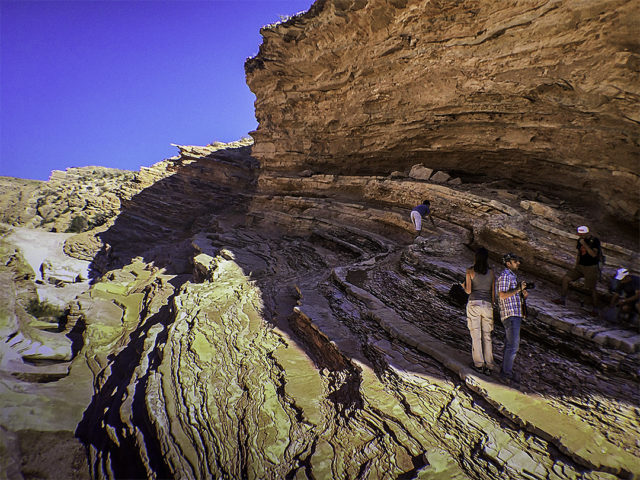 Sedimentary geology is interesting because it records a variety of geological processes over time. Some sedimentary formations, like those of Grand Canyon National Park, span billions of years. Arches National Park is unique not necessarily for its sedimentary deposits, but more for the erosion of those sedimentary deposits. The park gets its name from the arch formations that have resulted from thousands of years of weathering of the soft sandstone formations throughout the park. Hiking over and through the arches is like running an obstacle course. And taking some time to walk barefoot over the super fine and cool sand – a product of the erosion – is a treat after a hot day of hiking.

Sedimentary formations are also known for containing fossils, ranging from very small life and plant fossils, to dinosaur bones. The sedimentary formations within Badlands National Park tell a very interesting story of a drastically changing climate. From deep seas to swamps to deserts, the sedimentary geology in Badlands has recorded all of it, and the unique erosional processes allow visitors to actually see each stage in the ancient climate change. Fossils found in Badlands formations indicate a vast array of life thriving in this area of the North American continent. Fossils of marine life are found under layers of sediment containing fossils of swamp creatures, which are found under layers of sediment containing fossils of animals that evolved in desert conditions.

There are also some parks that fit into the category of “unique geology”, that is, very rare and not seen anywhere else in the U.S. Mammoth Cave National Park has the longest cave system in the world. Death Valley National Park is the lowest, hotest and driest location in North America. Petrified Forest National Park is one of the only places in the world where this type of fossilized wood exists. Yosemite National Park is a world-wide destination for climbers because of the towering granite formations, and was famous nature photographer Ansel Adam’s favorite park to photograph.