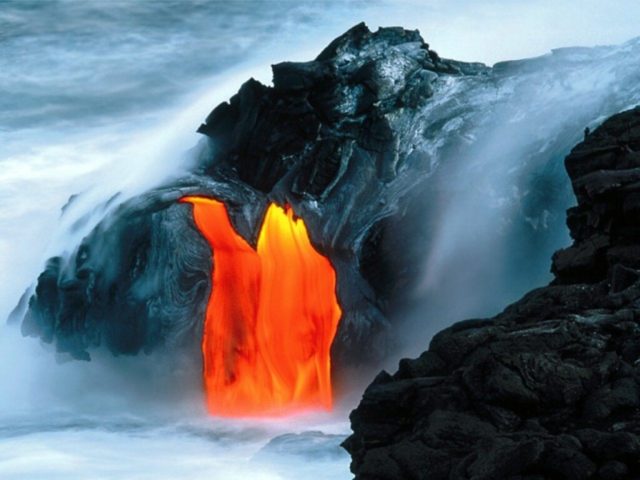 Visiting America’s National Parks can be a great way to tour the amazing geological formations located through out North America. Many National Parks are also geologically active and give insight into how the North American continent formed. Many of these parks offer guided tours with rangers who are experts in the local geology and who can point out some interesting geologic features.

Probably some of the most interesting parks in the U.S. are those that were, or still are, volcanically active. Parks where visitors can watch volcanism in action are Hawaii Volcanoes National Park and Yellowstone National Park. At Hawaii Volcanoes, the actively erupting Kilauea Crater puts on a show spewing out lava and toxic gases. Some people are lucky enough to visit during times when the Pu’u O’o vent is erupting lava close to park roads. In these cases, visitors can make the easy hike across previous (and cooled and hardened) lava flows to get as close as they dare to the active flows. Even if the flows are not accesible, seeing the Pu’u O’o vent glow at night is an unforgettable experience.

Yellowstone National Park doesn’t have an erupting volcano, but the entire park resides inside a crater that erupted 640,000 years ago and is still very much geothermally active. The geothermal activity is testament to the moving and flexing magma chamber beneath the park. Therefore, Yellowstone is considered an active, although docile, Supervolcano and is home to the Yellowstone Volcano Observatory. Sunset Crater National Monument in Arizona is an extinct volcano, meaning that there is no longer a magma chamber below it to provide energy for future eruptions. However, this is one of the few volcanoes in the U.S. that is safe to hike into, which can provide a unique opportunity for bragging to friends that you’ve been inside a volcano.