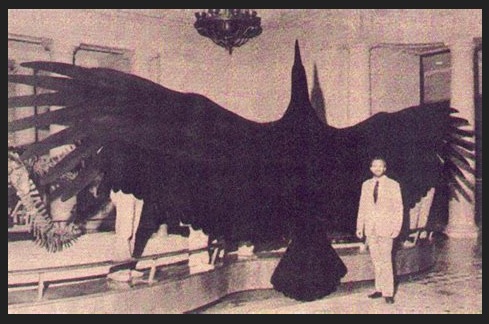 A Thunderbird is a large, winged creature that reportedly resembles a prehistoric pterosaur and has been spotted across North America, especially in the Midwest. The Thunderbird is a part of Native American folklore and also a subject of study in Cryptozoology.

Origin of the name

The Thunderbird’s name derives from its association with storms, as the creature is said to follow storm drafts, and even cause storms according to Native American myth. Thunderbirds are sighted all across the U.S, but the majority of sightings occur in the Midwest.

One of the first reported sightings of a Thunderbird occurred in April 1890, when The Tombstone Epitaph reported that two cowboys in the southern U.S. had killed a large bird-like creature with smooth skin and wings. For years, rumors circulated that an accompanying photograph of the capture existed and was passed around before eventually getting lost sometime during the 1960s. To date, the alleged photo has not surfaced.

In 1977, a man named John Huffer took several photos of two large birds taking flight from a tree. Although the sighting was mentioned by the Discovery Channel on their show, Into the Unknown, the birds pictured in the photos were dismissed as vultures rather than Thunderbirds. Thunderbird sightings have continued into the new millennium, including a 2002 sighting in Alaska where witnesses claimed to have seen a large, flying creature with a wingspan of roughly 14 feetIn 2004, a student in Southern California also reported seeing an unusually large creature flying over a suburban area which matched the Thunderbird’s description. In 1971, a Lowel,l Illinois youth claimed to have been actually lifted and carried a distance of about fifty feet by a giant black bird.

Possible identity of the Thunderbird

The Thunderbird has been compared to the wandering albatross which has a comparable wingspan of 12 feet, as well as other large birds such as the Andean condor and the California condor. Unlike these animals, however, which can prey on small animals in mid-flight, the Thunderbird has been reported to actually lift deer and even people off the ground.

Some have theorized that the Thunderbird is a species of pterosaur, such as a pterodactyl, which has survived the prehistoric age.

Some suggest it could be a type of condor or a once thought extinct bird, known as the Teratorn or a living specimen of Washington Eagle. The Washington Eagle once inhabited a large portion of the Central United States, but is thought to have become extinct in the early 1700’s.