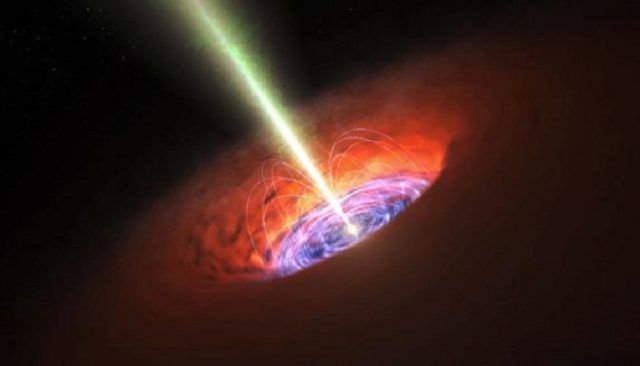 The Schwarzschild radius or event horizon is the one way boundary from which nothing can escape a black hole. It does not however represent the extent of the matter in the collapsed star. Like an obscure political boundary, nothing actually marks the event horizon.

No matter exists at this location. There is no force known to modern physics that can balance the inward gravitational force and prevent the star’s collapse. Hence at least theoretically, all the matter in the star collapses to a radius of zero.

It is important to make the distinction between theoretical predictions and reality. Scientific theories represent our best current understanding of how the universe around us works. The requirements for scientific theories are quite stringent, so they usually provide accurate predictions. However these predictions must be tested by experiments and observations. They can prove wrong, in which case we must modify our theory.

Our theories predict that all the matter in a black hole collapses to a geometrical point of radius zero, which is called the singularity. There is however no way to observationally test this theory. Perhaps the matter is really infinitely compressed into a singularity, or perhaps there is some as yet unknown force to prevent an infinite collapse. In the latter case the matter is compressed to a very small size, but not to a point.

At this point they tell us the singularity has all the matter in the black hole collapsed to a geometric point. This singularity has a mass comparable to a star compressed to a zero volume and infinite density.

For those who are bothered by the zero volume and infinite density presented by the singularity, quantum mechanics provides a possible way out. Quantum mechanics, first developed in the 1920s, describes the world of the very small.

It is based on uncertainty and probability rather than the absolute certainty of predictions in classical Newtonian physics. Protons, electrons, and other subatomic particles must be described by the laws of quantum mechanics rather than classical physics.

In the case of the singularity at the center of a black hole, such a probability distribution could remove the theoretical necessity for an infinitely dense singularity. All that remains is for someone to work out a complete theory combining quantum mechanics and general relativity. Stephen Hawking has made progress on such a theory, but more work needs to be done.