Back in 1999, the Cassini spacecraft detected what seemed to be water molecules and hydroxyl on the moon. In 2009, data analyzed from NASA’s Moon Mineralogy Mapper (M3) and the High Resolution Infrared Imaging Spectrometer on NASA’s Epoxi spacecraft confirmed the initial findings: water exists on the Moon. (Hydroxyl is a molecule that consists of one oxygen atom and one hydrogen atom.)

Water Discovered on the Moon

Water molecules and hydroxyl were found in diverse areas on the sunlit portion of the Moon, and the evidence for water is even stronger in higher latitudes and polar regions. Jessica Sunshine of the University of Maryland says “the entire surface appears to be hydrated during at least some portion of the lunar day.”

“Water ice on the Moon has been something of a holy grail for lunar scientists for a very long time,” explains Jim Green, director of the Planetary Science Division at NASA Headquarters in Washington, D.C. The Moon was long thought to be a completely arid world. The amount of water found on our satellite is still relatively small.

How Water Is Detected in Space

The spacecraft that discovered the watery signatures did so by analyzing the spectra from the Moon. M3’s spectrometer measured the light reflected from the Moon in infrared wavelengths. When the spectrometer split the light into its spectral colors, the wavelengths of light being absorbed matched with the absorption patterns for water molecules and hydroxyl.

An Image of Water on the Moon

The lunar image from NASA’s Moon Mineralogy Mapper on the Indian Space Research Organization’s Chandrayaan-1 mission is a three-color composite of reflected near-infrared radiation from the sun. Water and hydroxyl are shown in blue.

The Water Cycle on the Moon

The Moon’s hydrologic cycle shown here is a process of hydration, loss, and rehydration. In the morning when the lunar surface is cold, water and hydroxyl molecules are contained in the soil. By noon on the Moon when the Sun is overhead, the moon is warmest and some water and hydroxyl are lost from the soil. 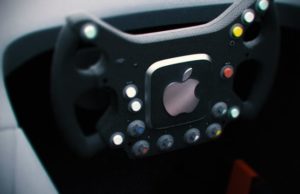 Uncategorized
Finally the rumor mill will stop guessing about Apple Car. Code named as Project Titan, the iDevice is learned to be focusing on software...