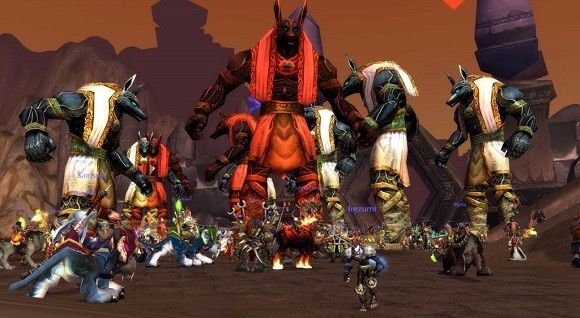 One of the many aspects of the game, World of Warcraft, is raiding. This includes getting 10 or more people together for a run through one of the many raid-dungeons in the game. This aspect of the game provides a social environment, teamwork, and the chance at better gear.

Some raid with a guild while others use pugs or pick-up-groups. To make a raid successful, there must be a raid leader that is in charge, willing to make tough calls and truly lead a group of people toward a common goal.

In This Article hide
1 Desire and Time to be a Raid Leader
2 Dedicate to the Success of the Raid
3 Dealing with Drama and Loot
4 Raid Leading: The Positives Outweigh the Negatives

Desire and Time to be a Raid Leader

The first part of being a good raid leader is to want to. If there is no desire to take on the role and have to deal with everything that the position entails, don’t do it. This will only lead to fail groups that do poorly in the raid and people who get moody, irritable and even irate.

A raid leader needs to be able to stay the entire duration of the raid. They can’t get up and leave because they are tired of playing, aggravated at how things are going etc. If real-life issues come up then that is a different story but only if it’s the rare instance and not a commonplace practice.

Dedicate to the Success of the Raid

Some raids are much simpler than others. Know the appropriate level requirements, gear suggestions and overall damage output expected for the intended goal at hand. The different raids can all be reviewed and researched through wowwiki.com. Take the time to learn what is needed on all aspects, i.e., tanking, healing and dps. Another place to research particular boss fights in the raid is tankspot.com which provides audio and visual tutorials of methods of how to defeat the boss. The raid leader should know the fights and be able to explain them.

Leader’s need to be dedicated to the goal of the raid. Whether that’s getting lower-geared people a taste of what the fights are about or downing the Lich King, they should know what to expect and what is required of their members. If it’s a raid just for fun, make sure to advertise as such. Be willing to kick people who are making the raid too serious and destroying the aspect of fun. If the goal is a difficult boss to down, be willing to make the call to remove someone if they aren’t pulling their own weight as needed. Tough calls are a part of leading.

Dealing with Drama and Loot

One of the many reasons people do not want to lead a raid is the drama that can ensue with getting that many people together. There are bound to be different personalities, opinions and these can lead to bickering and fighting among a raid if the leader doesn’t put a stop to such issues at the start.

There are all kinds of people in WoW and all types of personalities. Some just plain don’t work well with others. If someone is continuously being disruptive, not paying attention or being rude or obscene, a warning for the first offense and if it continues, be prepared to kick the person and have to find a replacement.

Be the leader! The leader has the ultimate say in anything. They can invite, remove and hand out loot if opted as the Loot Master. It is up to the leader to be the final say on how things are done. On the other hand, to be a good leader, one must be fair. Select and discuss loot rules at the very beginning so everyone knows what the rules are and how things will be rolled on from the start. Don’t let it be a surprise after getting someone saved to a boss.

While this position can be high stress and hold a lot of responsibility, building a group that works well together and goes through the raid conquering boss’s and having fun makes all the work worthwhile. Just make sure to know what is needed and have the confidence at achieving the goal in the raid. Try out simple raids such as Obsidian Sanctum before moving on to Icecrown Citadel or Ruby Sanctum. Most of all, have fun!

Business
Apple's 2017 iPhone devices are going to be priced higher than predecessors. If believed to the latest report, it is learned the iDevice giant may...