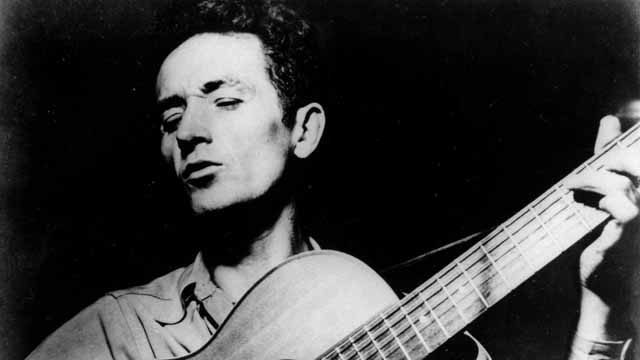 Woody Guthrie wrote scores of songs about the Labor Movement– enough songs to fill this article several times over. The folk singers of the time–Guthrie, Pete Seeger and the Almanac Singers, Lead Belly, Josh White, and others– played union halls and rallies on a regular basis.

“Union Maid” is one of Woody Guthrie’s best known worker songs. Praising a female union member who stands up with the rest of the strikers on the picket lines, the song became a favorite at rallies and halls and was included on the Almanac Singers album Talking Union and Other Union Songs.

Arlo Guthrie tells a story in concert about how before a rally, a woman came up to Woody and requested that he write a song about the Ladies’ Auxiliary. After hearing “Union Maid,” she said to Woody that it was a nice song, but did not mention the Ladies Auxiliary. Woody responded by writing a song on the spot that went something like:

“The Ladies Auxiliary/ is a mighty fine auxiliary/ it’s the best auxiliary/ of all the other auxiliaries (Arlo Guthrie in Concert).”

At first listen Bob Dylan’s song “Maggie’s Farm” appears to be about someone quitting his job on a farm– not an unusual theme among folk and blues songs. Further investigation, however, would show otherwise.

“Maggie’s Farm” is a metaphorical song about Bob Dylan’s aggravation with protest music, and in a sense, is a protest song about protest songs. Like a farm hand tread on by a tyrannical land owner, Dylan is confined by what the music critics and fans expect of him. When he declares “I ain’t gonna work on Maggie’s farm no more,” Dylan is declaring his independence from Folk music.

Workin’ At the Car Wash Blues by Jim Croce

One of the biggest singer-songwriters of the early 1970s, Jim Croce had a knack for writing both tender love songs (“Time in a Bottle,” “Lover’s Cross” and comic songs (“Bad Bad Leroy Brown,” “Rapid Roy”). “Workin’ at the Car Wash Blues” is one of the latter, the tale of a man with a very high opinion of himself stuck in a menial job.

“Workin’ at the Car Wash Blues” is easy to relate to. The protagonist laments “A man of my ability should be smoking on a big cigar/ but till I get myself straight, I guess I’ll just have to wait/ in this rubber suit a-rubbin this car.”

Pick a Bale of Cotton by Traditional

“Along with ‘Midnight Special,” “Grey Goose,” and “Goodnight, Irene,” this is one of the songs directly connected with Huddie Ledbetter (Lornell, Kip. The NPR Curious Listener’s Guide to American Folk Music.).” “Pick A Bale of Cotton” was a prison work song that Leadbetter, better known as Lead Belly, brought with him to New York City.

The cadence to “Pick a Bale of Cotton” is simple and repetitive, perfect for working to. Like many work songs, it has a call and response framework, with one person calling out a line, followed by the others singing either “pick a bale of cotton” or “pick a bale a day.” For example:

The first lines are often improvised, breaking up the monotony of endless manual labor.

Other Songs About Work for a Labor Day Playlist

Over 100 years have past since the first Labor Day, and perhaps the meaning and roots of it have been forgotten. This playlist, besides being entertaining, helps to remind that Labor Day is not just about barbecues and baseball, but to celebrate each of us, the common worker.