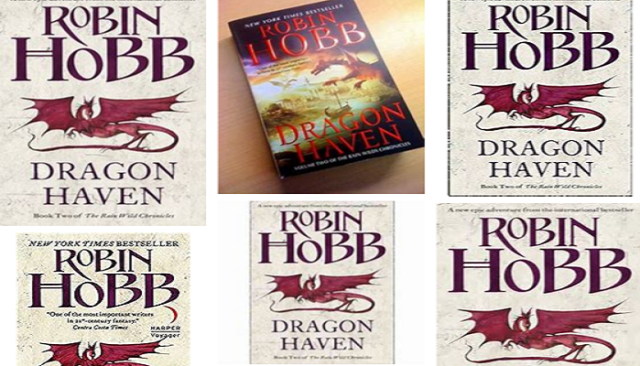 The Dragon Keeper was a dazzling series opening from highly respected fantasy author Robin Hobb. It left the reader desperate to find out what happened next.

Fans’ prayers have been answered with the arrival of Dragon Haven, likely to be the central novel a Rain Wilds Chronicles trilogy, simply because that is Hobb’s preferred story arrangement, as can be seen from her previous novels.

Dragon Haven picks up where The Dragon Keeper left off, just as Sedric, the ‘Bingtown fop’ as he is often referred to during the narrative, has inexplicably drunk the dragon’s blood he intended to make his fortune with. While this scandalous act goes unresolved for most of the book,

Sedric’s self-loathing, along with the fallout from his behaviour, act as an interesting undertone the novel. His tormented introspection is a feeling many of the more central characters experience throughout the events of Dragon Haven.

The clawed Rain Wild native Thymara is back and growing more interesting in terms of her relationship with Sintara, one of the most prideful of all the already arrogant dragons. Sintara’s continual pressure on Thymara, with its simultaneous, implied dismissal of her keeper, is a symbol of larger strains put on this young, strong, and on some levels highly naive woman.

Woman, because despite her age, Thymara and the other keepers are making a transition to adulthood, a process partly accelerated by their forlorn circumstances.

Then there’s Alise, the Bingtown dragon expert and oppressed wife on the cusp of a love affair with Leftrin, captain of the ship bearing the expedition up the Rain Wild River. Dragon Haven sees Alise shake off some of the affectations of her pampered life and become much more assertive.

The change is an excellent one, and well foreshadowed by Hobb, privy as the reader was to Alise’s innermost thoughts during The Dragon Keeper. The firm words that used to be internalised are coming out and its wonderful how delicately Hobb handles this change, indeed all changes characters undergo throughout the book.

Leftrin’s clear-sightedness and steadfast spirit continue to be a major anchor to the narrative. His love for Alise and his anxiety for her social status juxtaposed with his meticulous attention to the needs of his ship, the liveship Tarman, gives him an interesting balance of absolute certainty with moments of self-doubt.

One interesting facet is the greater exploration of Sedric’s homosexuality and his betrayal of Alise with her husband Hest. This is the source of some of the aforementioned self-loathing on Sedric’s part, and the novel spends some time with Sedric as he tries to resolve how he truly feels about Hest and debates whether to finally tell Alise the truth she is so completely oblivious of.

Fans of the letters between Erek and Detozi, Keepers of the Birds in Bingtown and Trehaug will enjoy their latest exchanges.

Furthermore, those curious about the nature of Tarman’s wizardwood ‘modifications’ will have their questions answered.

Summing up on Dragon Haven

In short, Dragon Haven is a novel with tons to offer the reader, brilliant in its own right as well as a part of the trilogy. Hobb’s terrifically realised attention to detail creates an unbelievable depth of realism unique to her work.

The novel does suffer a small amount from what all central books in a series suffer: the threads of the story are neither beginning nor end, simply becoming more tangled. Although Hobb is a writer of such skill that it is only a slight effect, it can leave the audience feeling slightly undernourished and as at the end of The Dragon Keeper, the reader just wants to know what’s going to happen next.

Make no mistake, this is an excellent novel, well worth the ravenous, devouring reading it will receive from enraptured Hobb fans. It’s just that as the narrative is closed, there is a part of the reader that will cry out, wanting know more, to find out where things are going. But unfortunately, that part will just have wait again. Judging from the speed with which Dragon Haven followed The Dragon Keeper, it can be hoped that the wait will be a short one.

New York State is Home to a Variety of Halls of...