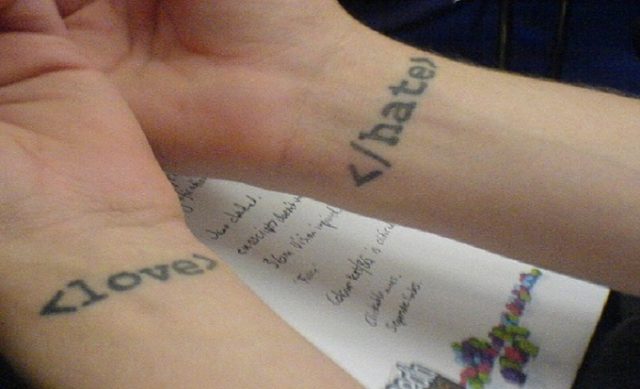 Similar to literary tattoos, the geeky tattoo trend has begun steadily increasing over recent years. Everything from video game characters to mathematical equations have found a home inked in the skin of a fan. Getting a so-called nerd tattoo is a way for people to express their fondness for a character or pop culture item, as well as to communicate that partiality to others.

Everything from Final Fantasy characters to the Mario Bros. have been tattooed onto fans. Video games provide a huge supply of tattoo material to those interested in getting a geeky tattoo; Dungeons & Dragons has been featured in many a piece of body art as well. Because video games are so widely played and recognized by those who play them, a video game tattoo is a simple but effective way to claim a preference for a specific game or character, and show it off to others.

Many video game tattoos are done exactly in the style of the game; from Pacman chomping his way up arms and legs to Link from Legend of Zelda, the tattoos form a moment from a video game that many people can relate to.

Additionally, many people decide to get a stylized version of their favorite game or character; collages, realistic portraits and simple gaming symbols are often seen as nerd tattoos. Even buttons and game controllers can be found in the ranks of geek tattoos.

Those with a more real-world fascination have been known to get math and science related tattoos. Everything from useful forearm rulers to diagrams of horseshoe crabs can be found in various places. Math and science tattoos not only form a bond between those who understand the images or concepts put forth by the equations or terms in the tattoo, but they also allow the person being tattooed to express something important to them in the form of body ink.

Geek tattoos appear heavily in the realms of math and science, allowing professionals to express their love of mathematical equations or scientific theory in a permanent way.