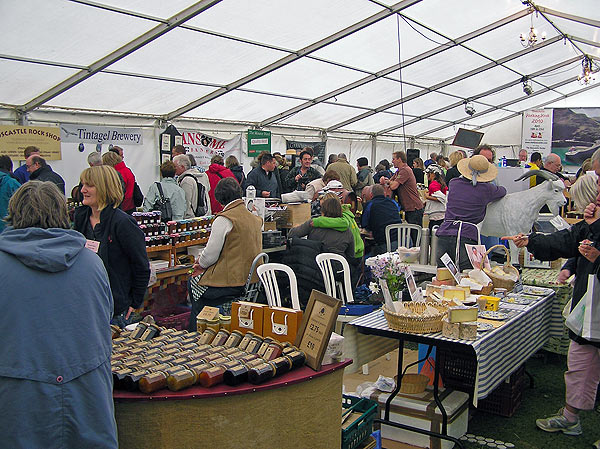 After the devastating floods that decimated the town of Boscastle in 2004, the community has rallied round not only to rebuild the village but to rekindle the tourist industry on which its economy depends. The first Boscastle Food, Arts and Crafts Festival was held in 2005. Hailed as being the biggest and best of its kind in Cornwall, the 2010 event will take place over two days at the beginning of October.

Boscastle nestles in a valley at the mouth of the river Valency on the coast of north Cornwall. In August 2004 a heavy storm deposited nearly three inches of rain in the area in as little as two hours. The resultant deluge pouring off the hills either side of the valley caused the Valency to burst its banks, sending a torrent of water through the village.

Miraculously, nobody died but there was considerable damage to houses and property. But, with true British grit and determination, the residents repaired and rebuilt their houses and businesses. They have also begun the onerous task of rebuilding the economy and bringing the tourists back. One of the events that has helped with Boscastle’s regeneration is the Food, Arts and Crafts Festival held in October.

The first Food, Arts and Crafts Festival at Boscastle was held in 2005 and has returned annually ever since except for 2007 when extensive repair work being carried out on the main village car park caused logistics problems. Celebrating the diversity, deliciousness and down right wholesomeness of the food and drink of Cornwall, it will be of interest to anyone interested in food.

Festival action is centred on the picturesque harbour area of the village and past Festivals have included demonstrations of cooking by local restaurateurs as well as chefs from the kitchens of Jamie Oliver and Rick Stein along with themed demonstrations such as healthy cooking for children, Cornish pasty making and how to prepare fresh fish.

The main marquee at the harbour houses stalls selling locally produced food and drink. Past events have included representatives from local microbreweries such as the Tintagel Brewery with its Harbour Special and Gull Rock beers as well as locally produced farmhouse cider. With locally produced venison sausages and burgers, traditional Cornish ice cream and clotted cream as well as traditional piccalilli and other preserves, there’s something to please every palate.

Details of the next Boscastle Food, Arts and Crafts Festival can be found at the Visit Boscastle website. Whilst in the area, why pop across the border and experience the food and drink of North Devon? From fresh fish at Bideford to free range beef, pork and lamb at Okehampton and a Mediterranean themed restaurant at Croyde, there’s bound to be something to delight.

Food to Eat for Healthy Skin