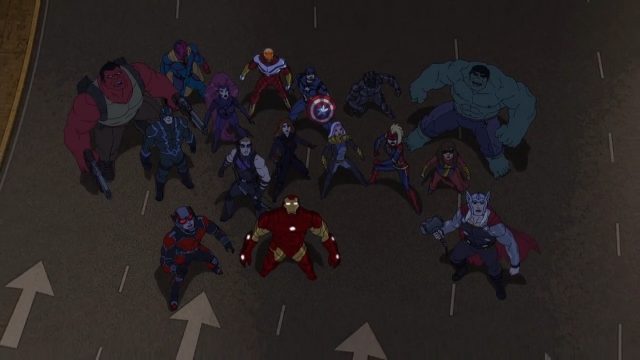 DC movies produced by Fox and Warner Bros. are considered to be the king of the animated world. Marvel remains on top when it comes to the live-action universe. Marvel live-action universe, also called MCU, has produced a series of top-tier quality superhero movies that blend with each other rather magnificently.

On the other hand, the DC counterpart, DCEU has been lagging behind the MCU big time. Regardless, when we talk about the Marvel and DC animated movies, a strong comparison can be made. In our opinion, despite some really underwhelming live-action movies, DC animated movies have an overall edge over Marvel cartoon movies.

However, make no mistake, there are some really good Marvel or Avengers animated movies out there that you can enjoy of you are a massive fan of the Marvel superheroes and would like to know everything there is to know about these characters.

Today, we have taken the courtesy of listing our picks for the best Marvel animated movies including some classics and some recent marvel movies.

So, without wasting much time, let’s jump to our first pick.

The war machine is dead and Iron Man is the main culprit as per S.H.I.E.L.D. Tony has to prove himself innocent by initially getting out of the custody of nick Fury and joining hands with fellow vigilant, the Punisher.

Meanwhile, fellow superheroes Black Widow and Hawkeye are on a hunt to bring down the Fugitive billionaire, genius, playboy, philanthropist. It is really a great movie that depicts the psychology of Iron Man and how he can be misinterpreted by the rest of the marvel superheroes.

Based on one of the most classic storylines relating to Tony Stark in the comics, the Invincible Iron Man features Tony Stark who is a selfish short-Tech billionaire and he is trying to save his own life. During this process, he ends up transforming himself into one of the most powerful superheroes in the world.

The joy does not last long as this gives rise to one of the most iconic nemeses of Iron Man from the comics, the Mandarin. Tony must now use his newly achieved powers to fight off the threats posed by the Mandarin on this world.

This is the only Thor movie in this list and it features young Loki and Thor on an adventure into Jotunheim for the purpose of retrieving the legendary Sword of Surtur.

You will see a lot of avengers animated movies on this list because those are some of the best-animated movies Marvel has ever produced. This is a unique story in which the Avengers are dead and it is now the responsibility of their respective children to make all the wrongs right.

If you are a hard-core fan and are expecting to see your favorite actors on the screen and instead of them, then you can be a little disappointed due to their kids showing up on the screen instead of them. But apart from this little hassle, the movie actually is pretty good and the story is emotional and captivating for the most part.

This version involves an adventure where the Avengers travel to Wakanda after T’challa approaches them for assistance in dealing with a Chitauri invasion in his Kingdom.

Talking in terms of commercial success, this animated movie is towards the top.

The only reason why it stars at number 5 on this list is that we are considering these movies as per specific criteria, and superhero movies always have an edge due to the fan demographic. Big Hero 6 pictures a fantastic story that would make both you laugh and leave you sad throughout the movie.

Benedict Cumberbatch did a really good job in the solo live-action Marvel movie of Dr. Strange. If you have seen that movie, you might already be aware of the fact that Dr. Strange has one of the most interesting origin stories in the whole Marvel Universe.

If you want to enjoy the origin story with even more details and as per the original source material, then this Marvel animated movie is best for you. You will most likely learn everything there is to learn about this character through this movie.

Before the MCU was even a thing, marvel fans had nothing to cling on to but this Masterpiece. Sure, the live-action storyline relating to the birth of avengers is quite similar to the comics, but this Marvel avengers animated movie sticks even more to the comic material.

The overall theme is quite similar as Captain America is resurrected in the modern-day and he leads a team of heroes against a global threat.

Even if the MCU is in full swing and you have a lot of live-action Avengers movies to enjoy, you can definitely check out ultimate Avengers if you are a diehard Avengers fan.

It may come as a surprise to newer marvel fans that some of the best Marvel animated movies are led by none other than the incredible Hulk.

The movie is not primarily focused on the story but boy do they get the fighting part right. This is surely one of the best Marvel animated movies.

The live-action Hulk movies have been underwhelming, to say the least, however, “Planet Hulk” does justice to one of the most under-used heroes in Marvel Cinematic Universe.

The animated movie is based directly on the hit comic. Similar to the source material, in this marvel animated movie, Hulk is exiled out of the earth into space by humans as he is considered too dangerous and unpredictable.

On his journey, things go really wrong and Hulk ends up at a planet that is ruled by a ruthless king. The comic was a hit but the animated picture did even better as it went on to become one of the most popular and loved Marvel animated movies.

Recent Marvel movies have gained a lot of global success and recognition. They have also attracted many new fans and these new fans are nothing but hungry to learn more about the newly discovered universe of superheroes.

If you are one of them, you must check out these best marvel animated movies to begin your binge journey. If you feel that some other movie deserves to be recognized in the list, you are more than welcome to drop your recommendations.

What Angry Birds Creator Rovio To Do In London