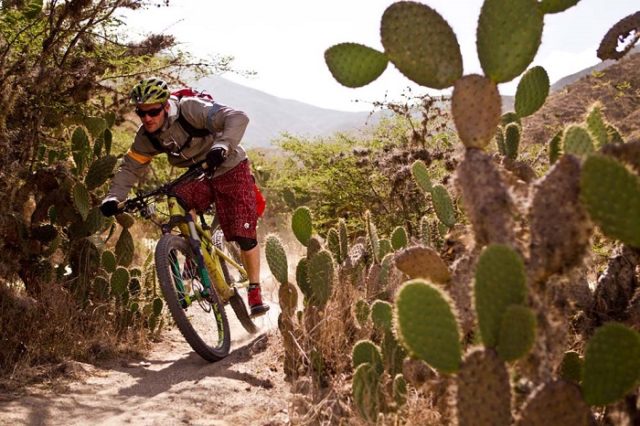 This beautiful biking route starts at about 2,800 m in the capital city of Ecuador, Quito. From Quito, bikers will cycle almost 70 km to the quaint, cloud-enveloped town of Mindo, in Ecuador’s northwestern subtropical cloud forest. Most of the route is unpaved, with some parts of the trail cobblestoned roads. Much of the route is downhill, although there are some demanding ascents on certain legs of the journey. It will take the whole day, although some cyclists prefer to take the route over two days in order to enjoy many of the natural delights along the way.

The route begins on the heavily transited Avenida Occidental Norte, a major highway that cuts across the most western side of Quito. It continues down to the neighborhood El Condado, where cyclists will take the “Ecoruta, Paseo del Quinde” route indicated on the signs, turning toward mighty Pichincha Volcano, which hovers over the city like an overprotective parent. From this point there is a steep ascent of about 9 km until cyclists reach the church of Rundupamba. For those who know the route well, there is a detour at this spot that goes into the natural reserve Yanococha, but bikes are not allowed on the reserve. From the church the route descends toward Nono (about 10 km). Most of the route is on a cobblestoned road.

Cycling into the Subtropical Cloud Forests of Ecuador: Nono to Tandayapa (25 km)

From Nono the route takes a downhill turn over unpaved roads. It is a breathtaking view of the subtropical cloud forests of Ecuador, but caution must be taken due to the possibility of buses or cars coming up the road in the opposite direction. There are also many hairpin turns that can be quite dangerous, as well as high ravines, so extra care should be taken during this stretch.

Once in Tandayapa the route takes another steep turn skyward. The ascent, on an unpaved road, is challenging. In Tandayapa, cyclists must turn left to continue the route. The area is a haven for bird-watching, and there is no end to the amazing views. This leg of the route ends in the hostería (lodge) of Bellavista.

Cycling Through the Fog: Bellavista to Mindo (12 km)

After Bellavista there is a 12-km descent to the paved highway below. Once on the highway, it is another kilometer until the entrance to Mindo is reached. Extra care should be taken once on the highway since it is heavily transited, with frequent patches of fog obscuring the road. At the entrance to Mindo there is a steep descent on a paved secondary road for about 6 km, with tight turns and some traffic.