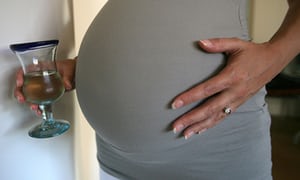 Researchers have once again raised voice pregnant women should not drink as it harms the baby.

Experts in paediatrics and pregnancy said pregnant women are getting confusing and contradictory advices. This sometimes put the baby at risk.

They said the baby may suffer from foetal alcohol syndrome, developmental and behavioral abnormalities, mental retardation and also low birth weight if the womb is exposed to alcohol.

Department of Health in the UK recommends even any women should not drink alcohol. If drinking is chosen, it should be limited to one or two units once or twice a week.

In the first three months of carrying the alcohol should be completely avoided as it may lead to miscarriage, says the National Institute for Health and Care Excellence (Nice).

Rohal College of Obstetricians and Gynaecologists (RCOG) too advises the same saying too much drinking may harm the unborn baby.

The researchers say it is not known when the foetal damage can occur and it also varies according to each individual pregnancy.

A consultant and honorary College London hospital, Patrick O’Brien, said there is no guarantee of any lower limit is 100 percent safe.

Meanwhile, it is also found more and more women have quit drinking during pregnancies.

Everything You Need to Know About Nursing in 2020