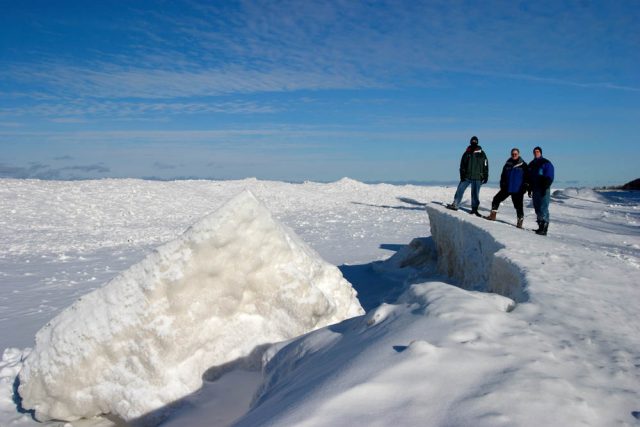 In the winter months the crowds have thinned out. Duneland offers a desolate beauty and the chance to encounter the animals of the area. The back woods and dunes offer great hiking and protection from the cold winter winds. And there are views of the lakes not seen any other time of the year.

The duneland area begins at the east end of Gary in Indiana, only about a half hour from downtown Chicago. The national lakeshore begins with Miller Woods and Marquette Beach and becomes more impressive as it continues further east. At the far east end and only about an hour or so away there is Warren Dunes and Grand Mere State Park in southwest Michigan.

During the winter the dunes areas are not crowded and there are unique views of woodland and sand dunes covered in a blanket of snow. The lake shoreline is often blocked with snow and ice floes from the water’s edge out several hundred feet out into the lake. The ice floes usually look like snowy mounds sitting on top of the water. One can walk out on them but be careful because the ice floes can be deceptive as to their thickness and depth of the water.

Continuing on, there is the national duneland forest which gives way to the areas largest dune at Mount Baldy Park. There are some backwoods trails here to traverse or just take the challenge of climbing the huge dune.

The national lakeshore ends about here but the dunes and beaches continuing further east on Route 12, the state of Michigan is but a short distance away. Staying on Route 12 (or Red Arrow Highway) Warren Dunes comes up soon, which is another impressive hiking area with a sprawling back woods and large, impressive dunes overlooking the lake. Just a bit further than that is Grand Mere State Park with more sprawling back woods that lead to dunes along the lake.

Many of the trails in the dunelands begin in the backwoods areas where the soil is sandy but often covered with dead leaves and twigs. The hills the trails traverse are not always as high but there are some impressive sights especially during the winter where the barren landscape allow for grander views. In Miller Woods the trails follow along several lakes and ponds through the woods before reaching sand dunes. In Indiana Dunes State Park and Grand Mere State Park trails circle great marshes.

The snow on the ground gives the hiker a chance to discover many animal tracks and determine which denizen passed through the area. In parks, such as West Beach, Indiana Dunes or Grand Mere, that have thicker and more desolate backwoods areas, it is not uncommon to encounter deer, racoons or an opossum walking leisurely along, or many other animals.

The most breath-taking and rewarding sights are a the top of the dunes near the lake. After a trek through the woods and a challenging hike up the backs of the large dunes, the hiker is treated to a grand view overlooking the lake from high above. This is especially true at the larger dune parks such as West Beach, Indiana Dunes State Park, Mount Baldy and Warren Dunes. In mid-winter there is the unique view of ice floes gathered along the shore. After a tiring hike through the woods and up the dunes, there is the enjoyment of scaling down the dunes and walking along the flat, sandy shoreline.

The larger and more established dunes parks also have beach buildings and nature centers where one can duck out of the cold, discover some history of the area and watch local birds and animals feed from the comfort of a large bay window.

There is so much to see and do in the duneland area that the whole of winter can be an adventure. The Indiana Dunes National Lakeshore not only offers the parks along the lake but other trails and places to visit such as the Bailly-Chelsburg Farm. Come out and enjoy the great outdoors in nature’s gift along the southern shores of Lake Michigan. 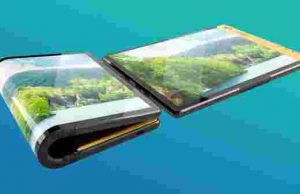 Smartphones
Finally unbreakable foldable smartphone has been launched after much waiting. It is the next big thing in the industry Pablo Escobar's brother...