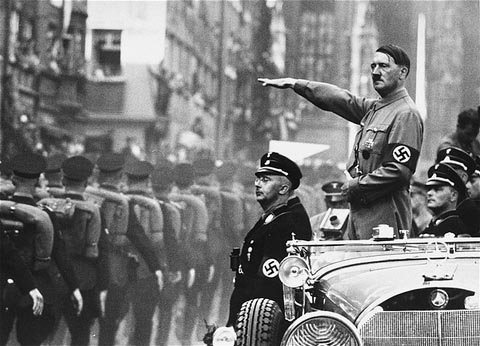 The Treaty of Versailles ending World War I is often used to explain long term German animosity to the peace and a chief reason for the rise of Adolf Hitler and the Nazi Party. Hitler skillfully reminded the German people that the uneven treaty had cost Germany much. The resultant social, political, and economic problems faced by post-war Germany contributed to the national humiliation, a prime factor in the rise of the Nazis, according to many historians. But are these conclusions truly reliable, or are there other factors that must be considered.

The Versailles Treaty demanded billions of dollars in war reparations. French troops occupied the Rhineland area of Germany to ensure compliance with the treaty. Imperial Germany was broken apart, its colonies distributed to the victors. Millions of ethnic Germans in areas like Silesia and the Sudentenland suddenly found themselves under the political jurisdictions of non-German regimes.

The German military was severely down-sized, an air force was forbidden, and the navy – the pride of Kaiser Wilhelm II, was used for target practice. Politically, Germany was torn by revolution as various factions sought control of state governments from Hamburg to Bavaria. Eventually, the Weimar constitution provided a feeble framework that would never lead to any semblance of democracy.

Lack of food and starvation, followed by Depression and high unemployment, ultimately dictated the need for decisive change. Yet the question remains as to whether the German people supported the Nazis and helped elevate Hitler to power solely on the basis of the Nazi promises and programs.

What the Nazis Provided Humiliated Germans With

Perhaps the most potent appeal of the NASDP was the focus on hyper-nationalism resurrecting the notion of Das Volk. Hitler’s speeches emphasized a greater Germany, the promise of a 1,000 year Reich. The very image of the term Reich recalled the heady days of the Second Reich when Bismarck unified Germany as well as the first Reich, identified with the formation of the Holy Roman Empire.

In one speech at Nuremberg, Hitler told the masses “German lies before us, Germany marches within us, and Germany comes after us (follows).” Hitler not only appealed to the working masses, the same group of people targeted by Social Democrats and the Communists (KPD), but received the support of the Catholic Church and, though reluctantly, the military. In many newsreels, Hitler is surrounded by generals and party cronies as well as the occasional Catholic bishop. In the jubilant crowds, nuns are seen waving.

Catholics, of course, supported Hitler because of the Nazi aversion to Communism. But beyond the many factors that propelled Hitler into power in 1933, it was the patriotic appeal to the restoration of Germany’s former glory that won the hearts and minds of Germans. This also helps to explain why non-party members enlisted in the military services once the war began in 1939.

Anti-Semitism is also used as a factor and it is true that many Germans, most notably in the south, were anti-Semitic. But Anti-Semitism was also strong in France and Poland, two countries that bore the brunt of Blitzkrieg and brutal occupation. To be sure, the Nazis used the Jews as a scapegoat, blaming them for the nation’s post-war ills and equating them with Communist tendencies (several prominent Communist leaders were Jews).

Isolating the Many Factors Attributed to Hitler’s Political Success

It may be too simplistic to attribute Hitler’s success to any one cause or even a series of causes. The Nazi Party, though making impressive gains, never captured a solid parliamentary majority. Why so many Germans ultimately cast their support for the Nazis up to and through 1933 may be far more difficult to assess.

How to Create a Local Band That Makes Money