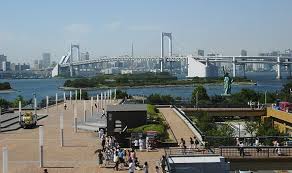 Odaiba is easily accessible from Tokyo via the Yurikamome shuttle line that can be picked up from Shimbashi or Toyosu stations. Odaiba is actually a man-made island that mostly houses entertainment and tourist attractions now. It is worth it to make the short trip there, because there are so many unforgetable and unique attractions.

Within Odaiba is an area called Palette Town, which can be identified by its multi-colored sign. Palatte Town is home to Fort Venus, a massive shopping mall with seemingly endless shops and boutiques. The entire mall is designed to look like a Venitian town, and is very Las Vegas-esque in this regard.

Decks Tokyo Beach Shopping Mall is yet another huge shopping center, this time designed to look like the deck of a ship. The building is right on the waterfront of Tokyo Bay. In addition to shopping and dining, the mall has a Sega Joypolis video game arcade inside.

There are a number of museums and attractions in Odaiba. Within the Palette Town area is the Toyota Showroom, called MegaWeb. Inside, visitors can take a look at some of the innovative concept cars with crazy features that Toyota has been dreaming up. The staff will even allow visitors to sit in some of the cars.

An iconic image of Odaiba is the Daikanransha Ferris Wheel. It stands at 155m (roughly 377 feet) tall. At one point it was considered the second tallest ferris wheel in the world, but has since been outdone by wheels in Singapore and China. Nonetheless, the views from the wheel are fantastic and the colorful lights that illuminate it at night are a spectaculatr backdrop against the rest of the island.

Fuji TV is a popular network headquartered in Odaiba. The station is housed in an incredible architectural building, and visitors can take tours through it to visit some of the popular characters on the shows and see the view from the observation deck. Fuji TV’s macot is a cute blue dog named Rafu-kun, or “Laugh” in English, whose image is emblazened everywhere in the studio and in the gift shop.

Rainbow Bridge is a bridge that connects Central Tokyo to Odaiba, and it is open to automobile traffic as well as pedestrians during certain hours. It is almost 2,000 feet long, and has a very clean and simple looking design during the day. However, at night the white support towers light up in rainbow colors, energized by energy collected by solar panels during the daytime. 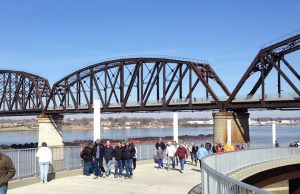 Lifestyle
The economy may be keeping many people close to home this summer. Just because summer vacation may mean a vacation at home,...