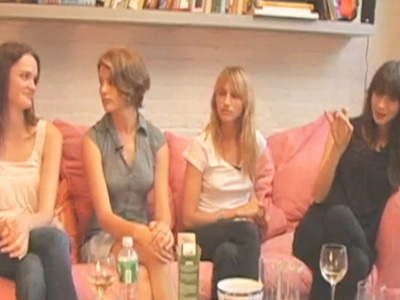 Within this tell-all, ex-model Sara Ziff turns the camera on the ugly side of high-fashion modeling, casting the spotlight on hidden aspects of the glitzy modeling biz, such as the rapid turnover of models on the runway and the price these ‘fashion victims’ have to pay for some catwalk fame.

Behind the Scenes: The Dark Side of High-class Fashion

At the centre of the film is Sara Ziff, model turned producer, who began her career as a high-class model when she was just 14 years old. At the peak of her career, Ziff worked for designers like Ralph Lauren and Marc Jacobs and could be seen on the glossy pages of Elle international and Tommy Hilfiger billboards on Times Square.

“A the end of the day I used to wonder: what’s the difference between doing a shoot in your underwear for Calvin Klein and being a stripper?” recalls Ziff in an interview with The Guardian. “Obviously you are compromising yourself. How far am I willing to go? How much am I willing to show for a big fat cheque?”

After more than 10 years on the catwalk, Ziff is exhausted, emotionally and physically, and the routine 20-hour days leave their marks on her spotty skin, limp hair and less-than-100lb light frame. “By the end, I was a shell,” Ziff concludes. “Sometimes people [in the fashion industry] forget you’re human.”

Tell-all: Backstage Footage from the Catwalk

Shot over a period of 5 years, co-director Ole Schell follows Ziff, charting her rise from fresh-faced ingénue to a full-fledged supermodel adorning billboards and magazine covers around the world.

The film captures the ride until she finally waves goodbye to the “predatory environment” of the fashion industry in order to pursue a full-time degree to study English and Fine Arts at Columbia University. “I was at work, being paid to do a job, be social, effortlessly cheery,” says Ziff. “Meanwhile I was sneaking in Ole so that he could film without other people realizing it.”

Framed by raw home-video footage and day-in-the-life snippets of Ziff, Picture Me also allows for a sincere, inside look at the modeling world through the eyes of the models themselves, giving a voice to the usually silent images of ultimate perfection.

The film premiered at the 2009 Genart Film Festival and was named Best Picture and also Best Fashion Film at the Milan International Film Festival.

How To Gain Confidence At Gym (Part II)

How To Gain Confidence At Gym (Part I)