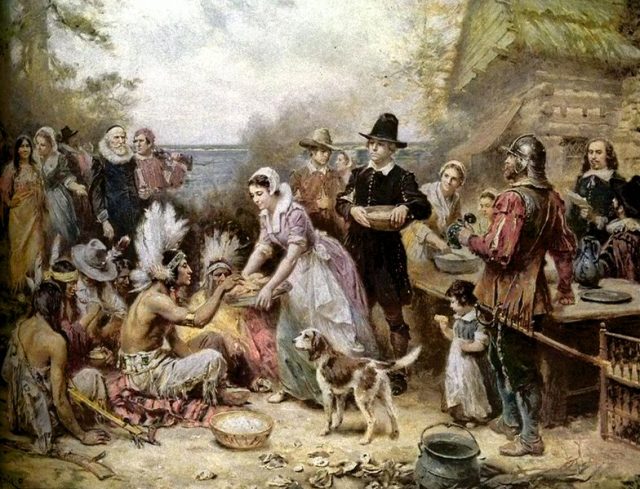 Songs of family gatherings and thanks for the harvest have a long history in the American celebration of Thanksgiving. The following three have traditionally been sung to honor the season.

Over the River and Through the Wood

This popular Thanksgiving song was written in 1845 by Lydia Maria Child as a poem called “A New-England Boy’s Song about Thanksgiving Day.” It first appeared in a book of poetry called Flowers for Children. Born in Massachusetts, Child was a novelist, journalist, editor, scholar and teacher and an abolitionist in her day. “Over the River” recalls memories from Child’s own childhood, but calling it a “Boy’s Song about Thanksgiving” probably made it more publishable in her day.

Of all Child’s work, this song may be the most remembered today. The first verse is repeated here:

Over the River and through the wood

To Grandmother’s house we go.

The horse knows the way

To carry the sleigh

Through white and drifted snow.

The full text of this song can be found at Representative Poetry Online, University of Toronto Libraries.

English hymnologist Henry Alford wrote the words for this hymn of thanks in 1844. The music was composed in 1858 by George J. Elvey, organist for St. George’s Chapel in Windsor, England. It celebrates the Medieval English festival of “Harvest Home,” which took place in September after the harvest had been gathered and stored. The hymn is still sung in many Christian churches at Thanksgiving.

The first verse is a call for the community to come to church and give thanks:

All is safely gathered in, ere the winter storms begin.

God our Maker doth provide for our wants to be supplied;

Come to God’s own temple, come, raise the song of harvest home.

The full text of this song and “We Gather Together,” below, can be found at HymnSite.com.

We Gather Together, A Thanksgiving Hymn

This song was often sung in schools and churches at Thanksgiving during the first half of the 1900s. It comes from a European folk song that was adopted by the Dutch to commemorate their victory in a 14th Century conflict. The Dutch version came to the U.S. with early immigrants and was translated into English by Theodore Baker in 1894. It began appearing in American hymnals in the early part of the 20th Century.

The first verse is repeated here.

We gather together to ask the Lord’s blessing;

He chastens and hastens His will to make known.

Sing praises to His Name; He forgets not His own.

The Early Years of Steve Young