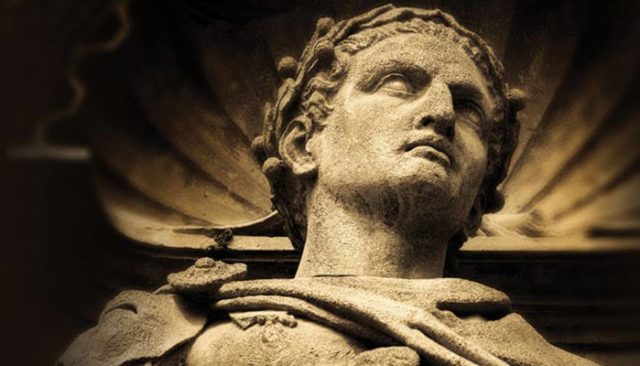 Like the election for the office of Pontifex Maximus, the Consular election of 60 BC was rife with dirty tactics. Caesar convinced Cicero to support him and formed an alliance with Lucius Luccienus. However, the establishment put its financial clout behind Marcus Calpurnius Bibulus. Even Cato, who was famous for his incorruptibility, is said to have resorted to bribery. Caesar and Bibulus were elected Consul for 59 BC.

The Consulship of Julius Caesar

Following the election, Caesar was already in Crassus’ political debt, but made overtures to Gnaeus Pompeus Magnus nevertheless. Crassus and Pompey had been political enemies since they had shared the Consulship in 70 BC. Caesar knew that if he could reconcile their differences, the three of them would have enough money and political influence to be able to dictate to the Senate. Known as the First Triumvirate, the informal alliance was cemented by the marriage of Caesar’s daughter, Julia, to Pompey.

When Caesar and Bibulus were first elected, the Roman aristocracy tried to limit Caesar’s power by allotting him the woods and pastures of Italy, rather than a provincial governorship. With the assistance of Piso and Pompey, Caesar was able to have this decision overturned and was appointed Governor of Cisalpine Gaul, Illyricum and Transalpine Gaul. Caesar was also placed in command of four Legions. The term for his governorship was five years, not the one year that was traditional for Roman Proconsuls. Following the end of his Consular term, Caesar set off for his provinces at once, in order to avoid prosecution for the irregularities that had occurred during his year in office.

At the end of his term as Consul, Caesar was still deep in debt. However, there was money to be made as a provincial governor, by both extortion and military conquest. Caesar commanded four Legions and two of his provinces bordered on unconquered territory. Additionally, Gaul was notorious for being politically unstable. In recent years the Aedui, a Gallic tribe allied with Rome was defeated by its rivals, with the assistance of a contingent from the Germanic Suebi tribe under the command of the Germanic chieftain Ariovistus. At the same time the Helvetii were preparing for a mass migration. In response to these threats, Caesar raised two more Legions. After dealing quick defeats to Ariovistus and the Helvetii, Caesar withdrew to winter quarters in the territory of the Sequanti, in Gallia Narbonensis.

In the spring of 56 BC, the Triumvirs met at Luca in Cisalpine Gaul. Rome was in turmoil as the populist attacks of Clodius continued to undermine the relationship between Crassus and Pompey. In spite of the growing difficulties, the Triumvirate was renewed and Caesar’s governorship was extended for another five years. At the same time the conquest of the Armorica Penninsula, which was begun in 56 BC, was completed by Caesar and the sons of Crassus.

In 55 BC, Caesar repelled an invasion by the Usipetes and the Tencteris. Later that year he attempted an invasion of Britain. Caesar established a beachhead in Kent however, poor preparations and inadequate intelligence forced Caesar to retreat to Gaul. In 54 BC, Caesar returned better prepared and with a larger force. Caesar was able to establish the Trinoventes tribe as a Roman ally in Britain.

At the same time, the Triumvirate began to unravel, following the death of Julia in childbirth. Not long afterward, Crassus was killed in a disastrous invasion of Parthia, and Pompey was elected sole Consul as an emergency measure. In an attempt to secure an alliance with Popemy, Caesar offered his great-niece Octavia in marriage, but Pompey declined.

In 52 BC, a revolt broke out in Gaul, led by Vercingetorix of the Averni. Vercingetorix was able to unite the Gallic tribes against the Romans and proved to be a capable battlefield commander, defeating Caesar on a number of occasions, such as at the Battle of Gergovia. However, Caesar was eventually able to trap Vercingetorix with elaborate siege works at the Battle of Alesia. Following the crushing Gallic defeat at Alesia, Gaul was pacified.

According to the ancient writer Plutarch, Caesar’s Legions fought more than three million men in the course of the Gallic Wars and burned more than 800 cities and towns. Modern historians are sceptical of this claim and believe that the Gallic Army numbered somewhere between 20 and 40,000.

Lifestyle
Although the WWE Hardcore Championship has now been retired, in the late 1990s and early 2000s it had a notorious and amazing history, as...

How to Mount a TV on Drywall