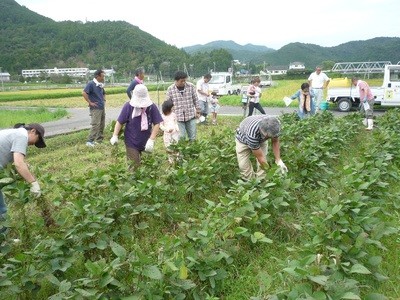 Agribusinesses and home gardeners alike commonly use herbicides to clear their harvest of undesirable growth. In 1995, the USDA studied 7,000 samples of fruits and vegetables for sale and found the residue of more than 65 pesticides. Baby food and foods commonly eaten by children often have higher numbers of pesticide residues than other foods, according to research published by The Environmental Working group. Emerging evidence indicates that herbicides such as glyphosate, atrazine, and dicambra have negative effects on humans and the environment.

Atrazine is one of the two most commonly used agricultural pesticides in the United States. The National Toxicology Program posits atrazine is immunotoxic and may damage the immune system. The Journal of Pesticide Reform states a form of immune system disruption is the lowered production of interferon, a molecule that curbs viral infection in those exposed to the chemical. Atrazine also damages reproductive systems: It caused prostate inflammation in laboratory rats in a study by National Institute of Environmental Health Sciences.

A 2000 study performed by the University of Nebraska-Lincoln revealed a larger number of birth defects in an Iowa community with higher than normal levels of atrazine in the water supply. The contamination level did not surpass EPA standards, however. The chemical negatively impacts testosterone, progesterone, luteinizing hormone, estrogen, and a thyroid hormone. Controversy surrounds research regarding the question of whether or not atrazine is carcinogenic, and studies are currently underway. The chemical is also banned in the European Union due to its damaging effects to the environment.

The herbicide 2,4-D is the oldest known herbicide in the United States. It was developed during World War II, and was a principal ingredient in the herbicide, Agent Orange, which was sprayed on Vietnamese crops during the Vietnam conflict. Up to 500,000 children were born with deformities after being exposed in utero to contaminated crops. Since the early 1980s 2,4-D has been manufactured using a process that does not produce dioxins, one of the most dangerous ingredients in the herbicide. However, 2,4-D remains hazardous, and in November 2008, the Natural Resources Defense Council issued a petition demanding the United States government revoke the chemical’s registration.

The herbicide has a half-life of one week, but according to the NRDC, it was present in surface water supplies throughout the U.S. It is estrogenic, and causes increases in estrogen levels in men and women. It also causes other disorders of the endocrine system, such as anti-thyroid, prolactin, and androgen. in cities where the water is contaminated at higher levels, the birth defect rate is also higher.

Dimethyl tetrachloroterephthalate, commonly known as dacthal, DCPA, or chlorthal-dimethyl, is a herbicide used to control crab grasses, other annual grasses, and weeds in home flower gardens, nursery stock, and a number of fruit and vegetable crops. It has been in use in the United States since 1958, but the EPA testing is either incomplete or not valid. Despite this, the EPA use incomplete tests them as examples of acceptable exposure levels. DCPA, the active ingredient in the herbicide is linked to adverse effects on adrenal glands, kidneys liver, thyroid and spleen. Its inert ingredients, HCB and 2,3,7,8-TCDD are linked to liver damage, reproduction failure, cancer, immune system damage, and skin disfigurement. 2,3,7,8-TCDD has a half-life of 10 to 30 years in soil after use.

Glyphosate herbicides are the most widely used in the United States. It was originally marketed in 1974 and its demand has widened since the introduction of genetically modified crops designed to tolerate the substance. Roundup, a brand produced by Monsanto, is just one of the glyphosate herbicides on the market.

Researchers in Caen, France, studied the effects of the herbicide on human placental cells. They discovered it damages sex hormones in concentrations lower than agricultural use, thereby creating the potential for reproductive problems. Caroline Cox, of the Northwestern Coalition for Alternatives to Pesticides, reviewed the dangers of glyphosate indicate increase in severity of diseases in plants, ingestion and exposure is linked to increased risk of cancer, fertility problems, immune system damage and the development of Attention Deficit Disorder.

When comparing the risks of these herbicides as opposed to the benefits of such use, it seems that it is healthier to use organic means to control undesirable weeds and plants, rather than using chemicals that put humans and the environment at risk.

Lifescience
Everyone has become an expert at forensic science; everyone has ideas on profiling, on fingerprints, on DNA evidence and on crime scene investigations. Maybe it...

The First Law of Thermodynamics

What Will Be Future Of Electric Cars In 10 Years Timeline?