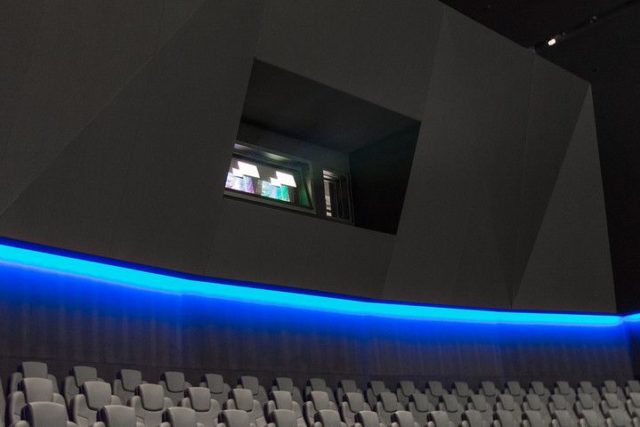 Where is the best movie theater in the world? Who has made it? Built in less than two years in San Francisco, it boasts absolute cutting edge of Dolby’s great new vision, which in the long run would be called as Dolby Cinema.

In the Dolby’s new building new theater has been designed to further expand the Dolby Cinema fleet, which is learned to be creating the darkest blacks, the brightest whites and about a billion shades of color. Of course there will be dozens of speakers too across the interior for explosive surround sound.

The baseline of Dolby Cinema is to completely dominate every other theater that exists in the world.

A 50-foot wide screen curved at the edges to offer excellent picture from any angle will greet just after stepping in through an airlock of automated doors. Dolby Blue lighting will give a floating screen effect and offer an impressive cinema infrastructure. Every aspect will look like have been aimed in providing an unparalleled cinematic experience including five feet thick walls equipped with 18 inches of air cushion to give total isolation from outside noises.

One thing to ensure here that with Dolby Cinema one will get the best ever audio/visual aspect. As of now there are fifty such theaters in fleet and by 2017 more 100 screens are coming up. It is suggested, if you love movies, find a Dolby Cinema near you and have a ride. It’s simply gorgeous.