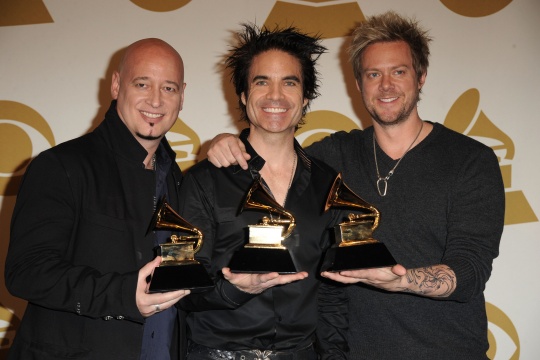 Rock band Train consists of Pat Monahan on lead vocals, as well as Jimmy Stafford on guitar and background vocals, and Scott Underwood on percussion and drums. Throughout their sixteen year career in music, they have released five studio albums, and have won two Grammy awards.

Their four most popular hits include “Drops of Jupiter (Tell Me),” “Calling All Angels,” “Hey, Soul Sister” and “Marry Me.” Lead singer Pat Monahan either wrote or co-wrote all of these aforementioned songs.

“Drops of Jupiter (Tell Me)”

Prior to their 2009 hit “Hey, Soul Sister,” the catchy “Drops of Jupiter (Tell Me) was the band’s most well-known song. It earned them five 2002 Grammy nominations in the coveted categories “Record of the Year,” and “Song of the Year.” They won two Grammys for “Best Rock Song” and for “Best Instrumental Arrangement.”

“Calling All Angels,” released in summer of 2003, peaked at #19 on the Billboard Hot 100 Charts, and reached the top of the Adult Contemporary Charts. The tune has been featured in popular television shows such as One Tree Hill and CSI: New York.

This song was nominated for two 2004 Grammy awards including “Best Rock Performance by a Duo or Group with Vocal,” as well as “Best Rock Song.”

Train’s song “Hey, Soul Sister,” released in summer of 2009, was their most successful radio single. It peaked at #3 on Billboard’s Hot 100 Charts and spent multiple weeks at the top of the Adult Contemporary Charts.

According to the Recording Industry Association of America (RIAA), the single has sold over four million units; moreover, their live rendition of this tune was nominated for a 2011 Grammy award for “Best Pop Performance by a Duo or Group with Vocal,” with the potential to win.

Their single “Marry Me” was released in October of 2010. It is a subtle performance by Pat Monahan showcasing the control and range in his voice on a soothing tune. Although it peaked at #11 on the Billboard Adult Contemporary Charts, it is perhaps the most compelling track from their latest album Save Me San Francisco.