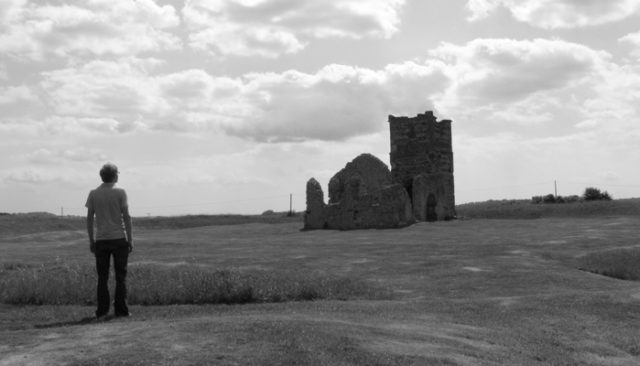 Like Nick Drake, Gram Parsons – often referred to as the “Father of Country Rock” – had his short, but highly significant career tragically cut short when he died at the age of 26. Also, like Drake, Gram enjoyed little commercial success during his lifetime, but his legend has continued to grow with each passing year, as new generations discover his music.

One of the first people to successfully blend country music and rock, Gram Parsons first rose to prominance with The International Submarine Band in the mid-’60s, before joining The Byrds in 1968. He then formed The Flying Burrito Brothers with friend, and original Byrd, Chris Hillman in 1969, and left to go solo in 1970.

Released in 1969, Rock Salt & Nails was the debut album of country singer/songwriter, Steve Young. Gram is officially listed on the record’s sleeve as playing organ, but, as Steve explains, his contribution was somewhat more profound.

The producer had played the tracks for Gram and Gram really liked it and wanted to contribute something, but more than that, he just sort of tried to lend moral support to me and encourage me.”

Throughout his career, Steve has constantly sought to avoid the limelight, preferring instead to concentrate on the music. Mainstream acceptance, in terms of the kind enjoyed by peers such as Willie Nelson and Waylon Jennings, has therefore eluded him. How did this lack of interest sit with the ambitious Gram Parsons?

“I think, lookin’ back, a subtle point would be that Gram couldn’t quite understand why my attitude was kinda like I wasn’t really trying to make it,” explains Steve, “and I think he couldn’t comprehend that – he sorta scratched his head, you know?

But he still tried to encourage me and he was sort of saying, between the lines, ‘Come on, let’s try to put this stuff on the map,’ but he was very kind to me and appreciative of what I was doing, and I admired his work as well.

He was the true so-called ‘Father of Progressive Country’ – I mean, with the Nudie marijuana suits and all that.”

Death of an Icon

Gram Parsons was as famous for his hard living as he was for his music. Was Steve surprised to hear of his friend’s demise in September, 1973?

“No, I wasn’t that surprised because when I met him, my first impression was that this was a tragic, fragile person,” he admits. “I’m just generalising, but his type of person conjured up in my mind memories of a certain southern character that was from a rich family, or a once-rich family, and they were fragile, and usually alcoholic, and a lot of them just couldn’t quite make it.

He reminded me of that ilk of people and, of course, he came from a different side of the tracks, so to speak, than I did – that was just my first impression of him.

I wasn’t all that surprised when he OD’d because I had seen him once, not so long before that, in San Francisco in the Filmore West and we went back into this dressing room and they were all ethereal in there. I don’t know what they were doing, but man, they were out there!”

Gram came from a rich southern family and, although he never enjoyed much during his lifetime, was able to support himself financially through a sizeable trust fund. Bearing in mind his considerable wealth, was he a humble man?

“I thought he was,” replies Steve. “I thought he had a humble quality to him and I liked him – that was one of the reasons. Yeah, I thought that he was kind of a humble guy.”

Steve’s collaboration with Gram was brief, but meaningful, and clearly left a lasting impression on a man whose sole concern has only ever been the music.

Although Gram did seek fame, the two men bonded over a new, more rock-orientated style of country music that was to revolutionise the genre in the 1970s, and lead to the Alt. Country sound of the 1990s and beyond.

The Early Years of Steve Young