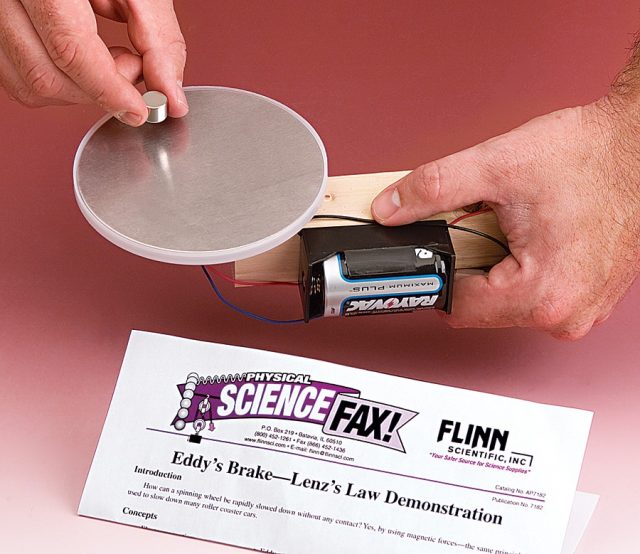 This physics demonstration experiment requires only two pieces of equipment: a copper or aluminum pipe and a fairly powerful magnet that is small enough to fit inside the pipe. The size and shape of the magnet does not matter as long as it can fit easily into the pipe. The exact length of the pipe is also unimportant, but the type of pipe does matter. It must be a metal that conducts electricity but is nonmagnetic. Copper or aluminum will work. Iron, steel, or any type of PVC will not work.

Now simply drop the magnet down the pipe and watch what happens. You won’t quite have enough time to go get lunch while the magnet is falling through the pipe, but it will take much longer than one would expect.

For a similar experiment working on the same principle, find a pizza cutter, or similar spinning disk, made of a nonmagnetic metal. Taking care not to cut your hands, get the disk spinning as fast as possible. Then place the spinning disk inside a fairly powerful horseshoe shaped magnet. Watch it quickly stop spinning.

Why does the magnet fall so slowly? Why does the pizza cutter disk stop spinning? Faraday’s law and Lenz’s law provide the keys to understanding these demonstration experiments and the magnetic braking effect.

Similarly the spinning pizza cutter disk has induced eddy currents. The currents induce magnetic fields that oppose their cause, which is the spinning disk. The disk slows to a stop.

If you are a teacher at any level, this physics experiment is an excellent classroom science experiment. Students of any age love watching the magnet fall slowly through the pipe. Students who are still too young to understand the physics explanation can enjoy watching it and in the process become excited about science. Older students will be more inclined to pay attention to explanations of Faraday’s and Lenz’s laws if they know it will help them understand an interesting demonstration experiment that they have just seen.

Get some magnets and a pipe and have fun learning physics. This experiment is a great science lab for kids of any age.

Do You Know The Three Great Physics Theories