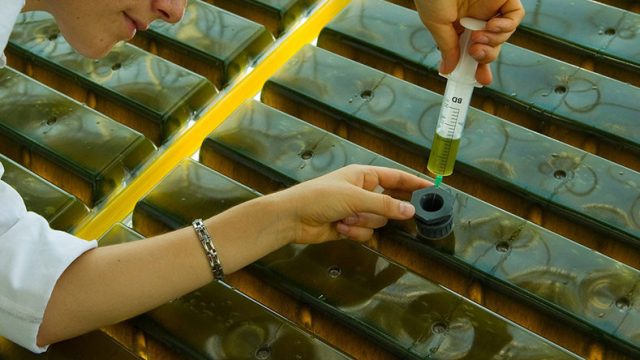 The algaculture process is theoretically simple and most importantly doesn’t divert vital food supplies like wheat, corn or soybean like many other biofuel processes do. Nor does algae production use arable land or precious fresh water supplies, as many algae species will thrive in salt or wastewater.

Algaculture is a process by which solar energy and carbon dioxide (CO2) from the atmosphere are used to create oil, biodiesel, ethanol and even cattle fodder. Essentially algae is kept in ponds or inside a photobioreactor and exposed to light, so photosynthesis and cell division can occur. A dark phase is then required for the addition of water and CO2 – even potentially re-using CO2 emitted from power plants. John Sheehan and co-authors write that, “the bubbling of flue gas from a power plant into these ponds provides a system for recycling of waste CO2 from the burning of fossil fuels.”

The algae then grows rapidly, after which the water is removed, and the remaining mass – a combination of protein, oils and carbohydrates – is dried and pressed. The oil can then be removed to create biofuels including biodiesel. Jason Pyle, CEO of Sapphire Energy, told Wired magazine in May 2008 that algal based biofuels would still produce C02 when burned but because CO2 is used during the production process these emissions have a more neutral effect on carbon levels in the atmosphere.

After the oil has been extracted the remaining protein can be used for animal food and the carbohydrate for other biofuels.

ExxonMobil, who, in July 2009, announced a US$600 million investment in finding a photosynthetic algae capable of producing biofuels, estimates algae can produce 2000 gallons of fuel per acre per year. This compares favourably with corn, which can only produce 250 gallons per acre per year.

But can it be done cost effectively and efficiently? Undertaking algae production on a large scale is a learning curve as many who have tried can attest. Learning curves can be expensive especially when compared with tried and true fossil-fuel facilities, as well as alternative and more predictable biofuel feedstocks like corn, soybean and sugarcane.

Green Star Products has a 40,000 litre algae-to-biodiesel demonstration facility in Montana but the company continues to be frustrated by the lack of support for their work from the US Department of Energy, and logistical problems with the growth phase of the algae. In his end of year (2009) product report, President of Green Star Products, Joseph LaStella, says “Unfortunately, the Department of Energy’s multiple fundings in 2009 showed a clear preference for special interest groups that have received DOE funds in the past… However, we suspect this might change in 2010. The DOE has shown its awareness of the consortium’s strengths.”

Privately-owned Algenol Biofuels, and Biofields are working together on a salt water algae facility in Mexico using different algal technology to produce ethanol and absorb C02 in the process. In December 2009 Algenol received a $25 million US Department of Energy grant for their pilot scale algae-based CO2-to-ethanol process. According to Algenol, their ethanol has a life cycle carbon footprint that is 20% of that for regular petroleum.

San-Diego based Sapphire Energy used a blend of algae based renewable fuel in an unmodified engine of a plug in hybrid vehicle similar to the Toyota Prius to cross the US in September 2009. In December 2009 Sapphire received $100 million of US Federal funding to develop their algae based green crude – a drop-in replacement for crude oil.

British Petrolem and ExxonMobil are also investing in developing production systems that may well bring algae based biodiesel to the petrol bowser.