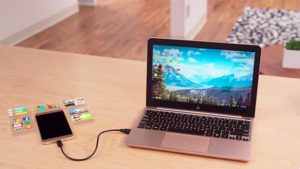 There are couple of options available to turn your smartphone into a PC and it is believed one day the trend can lead to replacing stand-alone PCs with smartphones, which will be available for use anywhere and without the need of syncing.

One example to mention here is Microsoft’s Continuum that sees smartphones running Windows 10 function as computers after pairing with a monitor and a keyboard. However, here we will discuss three individual products that serve the purpose. Below are those:

Last year, Microsoft launched its first Continuum-based Windows 10 smartphones to support transforming the device into mini-PCs with the help of Microsoft Display Dock (HD-500) by simply connecting to a monitor, mouse and keyboard.

Priced tagged at $99, the central docking station thereafter can help accessing content of the smartphone to a monitor similar to a regular PC. You can type, edit content, modify and update as well. All are saved to the smartphone’s memory.

The NexDock is another way to turn your smartphone into a PC. It comes from the stable of Nex Computer and is priced tagged $119. The dock helps in converting a smartphone running on Windows 10 into a laptop computer. If you connect smartphone run on iOS or Android, you can still connect to the adapter to watch videos and play games.

It is to take note the NexDock connector is compatible with pocket PCs such as Lenovo Ideacentre Stick 300, Raspberry Pi and Asus Chromebit.

Launched from the house of startup company Andromum, the Superbook connecting dock is compatible with Android smatphones to turn it into an 11.6-inch laptop PC.

The adapter however works with Andromium OS named special application to display the same interface on the Superbook screen. It is priced tagged just $99.