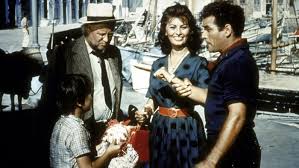 Ever since Boy on a Dolphin was shot in Greece in 1957, its sapphire seas, islands, whitewashed villages and cities have been the setting for nearly 90 international movies. The island of Hydra was the setting for the film, which starred Alan Ladd, Clifton Webb and Sophia Loren.

A string of classics followed, including Never on Sunday, shot in 1960 in the port town of Piraeus and starring Melina Merkouri. Although it was set in Turkey, many of the scenes in her second hit movie, Topkapi, were shot in Rhodes. Her partners in this suspenseful heist were Peter Ustinov, Maximilian Schell, Robert Morley. Another string of greats — Gregory Peck, David Niven and Anthony Quinn — starred in the war movie, The Guns of Navarone, also filmed in Rhodes, in 1961. And in 1964, Anthony Quinn starred as Zorba the Greek, shot in Crete.

Roger Moore played James Bond in For Your Eyes Only (1981), filmed in Meteora and Corfu. The hang gliding scene was shot at the monasteries of Meteora and the casino scene was shot at Corfu’s Achillion Palace. Corfu was also the site of an underwater scene showing an ancient Greek temple with a giant turtle swimming around it.

Summer Lovers, starring Darryl Hannah and Peter Gallagher was filmed on the island of Santorini in 1982. Mykonos Grand Hotel And Resort, a member of the Small Luxury Hotels of the World, overlooks Ayios Yiannis beach, where the movie Shirley Valentine was filmed in 1989, starring Pauline Collins. Fans of this classic still stay at the hotel, which is shown in several scenes.

The next major movie filmed in Greece was Captain Corelli’s Mandolin, in 2001, with Nicolas Cage and Penelope Cruz; it was shot in Cephalonia. The next year, the last scenes of Bourne Identity, starring Matt Damon, were filmed on the island of Mykonos.

In 2008, the musical Mamma Mia! brought instant fame to two previously little-known islands in the Northern Sporades, Skopelos and Skiathos, where Meryl Streep and Pierce Brosnan dance on Kastani beach. The jetty was constructed for the shoot. The most often-asked question as soon as the film was released, was “where was the wedding scene filmed?” the answer is St. John of the Small Castle church, about an hour’s scenic drive from the town of Skopelos.

And in 2009, look for the first-ever movie shot at the Acropolis and Olympia. Nia Vardalos, star of My Big Fat Greek Wedding was granted a rare exception to film scenes from her new movie, My Life in Ruins at these and other ancient sites in Greece. Richard Dreyfuss is her co-star.