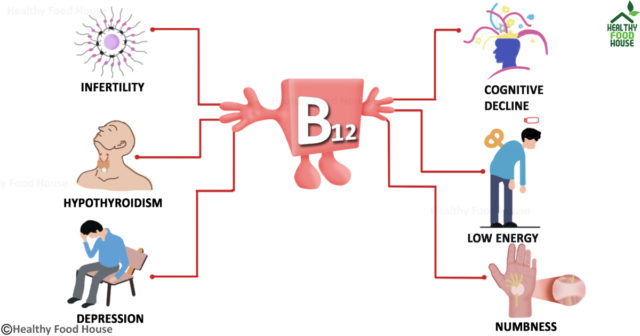 Today, as vitamin supplements gain in popularity, the potential to overdose has become a primary concern. However, one vitamin that tends to be overlooked and is of major importance is B12. A B12 deficiency is, in fact, among the highest nutritional deficiencies in developing countries and potentially in the United States also. Vitamin B12 is imperative in the correct formation of red blood cells and also plays an important role in maintaining healthy nerve tissue.

Without the proper amount of B12, development of a blood condition referred to as pernicious anemia is possible and highly likely. This condition, once developed, does not allow an individual to produce the protein substance needed to allow the absorption of vitamin B12. An additional detriment of a B12 deficiency is the inability to absorb folic acid, another component the body needs to function properly.

Why Does B12 Affect Health?

Deficiencies in needed vitamins generally take place gradually and, at times, may take a number of years to develop.

Initially, symptoms of a deficiency in B12 can be small, barely noticed neurological or cognitive changes which tend to increase with time. As the deficiency becomes more serious, anemia and/or dementia may develop. In order to have proper multiplication of red blood, cells the presence of vitamin B12 is necessary. As the deficiency increases, the red blood cells drop and the individual subsequently develops anemia. Fatigue and palpitations are two of the primary symptoms of anemia created by a B12 deficiency.

What are B12 Deficiency Symptoms?

In addition to fatigue and palpitations, symptoms include:

If not corrected and the deficiency is allowed to continue a number of neurological symptoms may appear, such as:

Who is at Risk?

Virtually anyone has the potential of developing a vitamin B12 deficiency. However, vegans, those on a vegetarian diet, infants and the elderly are generally placed in the group that is considered at high risk in developing this deficiency. Since vitamin B12 is derived solely from animal-related products, those who refrain from eating dairy, eggs or meat are at risk; however, vegetarians who do consume dairy products and eggs generally do not consume the recommended daily dose of 2.4 mcg.

As the population grows older, approximately 30% of individuals over 50 develop a stomach lining that is thinning or atrophic gastritis. With this condition, the small intestine is unable to absorb B12 which may potentially lead to more severe conditions. A multivitamin, eating a breakfast cereal that has been fortified or possibly both is recommended for those considered at risk for a B12 deficiency. Anyone who has these conditions should review their situation with a doctor and check on receiving a B12 blood test.

Big Tech Platforms Are Combating Against The Misinformation and Fraud About...