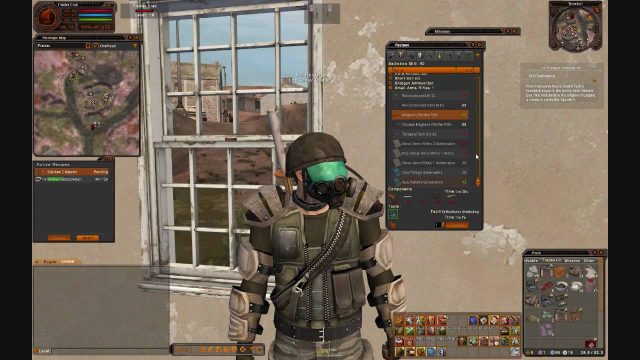 Tradeskills are an almost essential element of Fallen Earth. Practically every item in the game world may be crafted for use or sale by the players. While seeming complicated at first, the system is actually relatively well designed and quite accessible. It is possible to focus on crafting by itself and level up that way, or just do it as an addition to other activities in the game. This guide assumes that the player is more or less familiar with the basics of the game itself, a guide to those is available here.

There are two distinct skill sets – Salvaging and Item Creation in the “Tradeskills” Tab of character sheet. These skills are raised by usage – every time the player succeeds in salvaging or crafting an item which skill requirement is less than 30 ranks below level the appropriate skill goes up by one.

Using the games waypoint system is very helpful – placing a waypoint is achieved by double clicking on the map (“M” key by default) and then using Alt-P to access and manage a list of all previously placed waypoints. All salvage points respawn after a set time.

Salvaging as the name implies are the skills necessary to gather the resources you might need for later refinement. There are several sources of those:

Scrap, strewn all through the wasteland, indicated by a “pile of garbage” icon on the minimap (top right corner of your screen). These resources can be the most random, but follow a logical pattern – you will get water from old water bottles, steel, gears and fasteners from vehicles and so on.

Nature resources, governed by the “Nature” skill, which include wool, wood, wheat and other “organic” resources, gather points are marked by a green leaf icon on the minimap. These are usually self-explanatory – wood from logs, wool from wooly cactuses and so on. In addition there is a small chance one will get “botanical chemicals” from them, which are required for most basic “nature” based items the player can craft.

Geological resources, marked by a “rock” icon on the minimap are ores – coal, lead, copper, iron and so on. In an addition those can be further refined using the Geology skill – iron and coal produces steel, steel can be further refined to get “purer” samples. Once again, what one gets from each node is pretty self explanatory, similarly to nature resources, there is a small chance the player will get a “geological chemical”, although unlike Nature resources, those can be harvested from their own dedicated “Chemical Resource” gather points.

Biological resources are harvested from bodies of “animal” type monsters. Those include hides, meat and the works, used mostly for cooking. There is a chance the player might get a “biological chemical” from the bodies instead of the usual loot. This should be noted as chemical and biological chemicals are necessary for creation of one of the games most valued resources – gunpowder.

The crafting component by itself is less complex – all you need is a proper recipe (you can either buy them, get them from quests or research them yourself once your skill level allows you to), the required amount of skill points (shown in the right part of the crafting tab, L key by default) and the needed resources – listed after clicking on the appropriate item one wants to craft.

Creating more complex items requires creating its sub-components first, which in turn require the most basic salvageable resources. Auction Houses (Hammer icon on the map/minimap) in most bigger cities in the game tend to offer those if collecting them proves to be problematic, but the game world is pretty plentiful in salvage points.

Crafting time is affected by standing in the proper “workshop” for the tradeskill the player is using – so crafting “science” components will be faster if the player stands in a “science workshop”. These are represented by the same icons on the minimap that the skills have in the recipe/crafting menu. Logging out does not stop the crafting cycle nor affect the time needed to complete the item. The skill points gained for crafting is accumulated once the player “collects” the ready item, so logging out will not affect the skill points gained. It is important to note, items may not be moved up/down in the crafting queue, so pre-planning is necessary.

This is all needed to know to start crafting in the game and these skills are pretty important. The added bonus of not actually having to spend AP on crafting skills is a definite plus, though it is possible to excel in this aspect of Fallen Earth by spending AP for Intelligence and Perception – the two stats governing all Tradeskills. 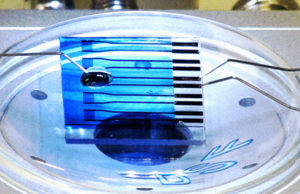 Lifescience
When does one end life support in order to salvage organs for donation? Is it right to continue psychological experiments if either short- or...

Shanghai Attractions near the Huangpu River

Tips to Control Dust Mites in the Home