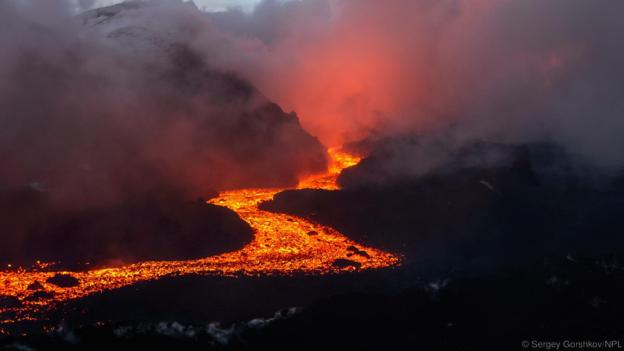 Volcanoes are environmental features and so they have environmental impacts. The recent disruption caused by Iceland’s Ejyafjallajokul volcano has drawn attention to the considerable economic effects which such eruptions can have: but in the greater scheme of all things geological, the eruption wasn’t all that big. Larger volcanic eruptions, even when they are relatively short-lived, can have a considerable impact on the local and wider environment.

Some eruptions – such as that of Vesuvius in 79AD are short and sharp: others, such as the Laki fissure eruption of 1783, go on for months. The local and immediate impacts of the shorter, more explosive eruptions will initially be more significant, although the longer eruptions will also cause local environmental damage.

The initial eruption can cause considerable blast damage. The explosion of Mt St Helen’s, for example, destroyed vegetation and flattened mature trees for many miles around. The exposure of bare soil raises risks of soil erosion: National Geographic reports that the devastated area was sown with fast-growing grass seed and sprayed with fertiliser in an attempt to stabilise the slopes.

Other immediate volcanic hazards include flow events. Pyroclastic flows, made up of a mixture of superheated volcanic debris, travel down slopes at huge speeds in the early stages of an eruption, causing immense destruction. On volcanoes where ice is melted, huge mud-flows, or lahars, are common and may reach many kilometres from the source; while volcanoes underneath ice caps may generate huge melt-water floods, or jokulhaups.

Ash, as the world learned from the eruption of Ejyafjallajokul, is a considerable hazard. In areas close to a volcano it can fall fast enough and thickly enough to cause problems by its sheer volume (for example, it was ash rather than lava which caused the tragedy of Pompeii). The ashfall from the Laki fissure eruption smothered crops, killed animals and led to widespread starvation (Open University). Globablly (and harmlessly) the ash is also responsible for spectacular sunsets.

Perhaps the most widespread impacts are those generated by volcanic gases. They can have local and immediate impacts (carbon dioxide, which is heavier than air and barely detectable, has been responsible for suffocating many thousands of people and animals) or, more significantly, become part of the earth’s atmospheric system and thus have the capability to affect local, regional and global weather and climate systems (USGS).

Various gases are erupted from volcanoes. The most significant are water vapour, carbon dioxide, sulphur dioxide, hydrogen chloride and hydrogen fluoride. These gases are erupted in varying quantities and, through a series of complex chemical reactions which take place in the atmosphere, can have contrasting, and counter-acting impacts.

Over geological time, huge eruptions of lava have generated massive areas of rock. These eruptions have had significant environmental impacts.

Sulphur dioxide is instrumental in atmospheric cooling. Combined with water (or water vapour) it produces sulphuric acid, forming sulphate aerosols which are the nuclei for condensation of water vapour and the formation of clouds. Put simply, by reflecting solar radiation back into space they affect the Earth’s radiation balance: various eruptions have been associated with periods of global cooling of one to three years (OU, USGS).

Other reactions between the gases (especially involving sulphur dioxide, hydrogen chloride and hydrogen fluoride) cause acid rain, although these gases generally fall from the atmosphere relatively quickly after the end of an eruption. Further complex reactions create chlorine monoxide, a chemical which destroys ozone.

Significant volumes of carbon dioxide are released into the atmosphere through volcanic eruptions. Carbon dioxide is a greenhouse gas and is associated with global warming. However, studies so far completed indicated that the volumes erupted are only a fraction (approximately 0.3%-1%) of the amount of anthropogenically-produced carbon dioxide and are therefore regarded as insignificant either in terms of global warming or of counteracting any cooling effects (USGS Volcano Hazards Program).

The impacts of volcanoes on the environment are far more complex than can be summarised here. Different volcanoes, and different types of eruption, taking place in different areas, may show considerable variation – for example in the quantities of gas or ash. The key point is that larger eruptions are capable not only of causing significant local environmental impacts, but also of generating global effects.