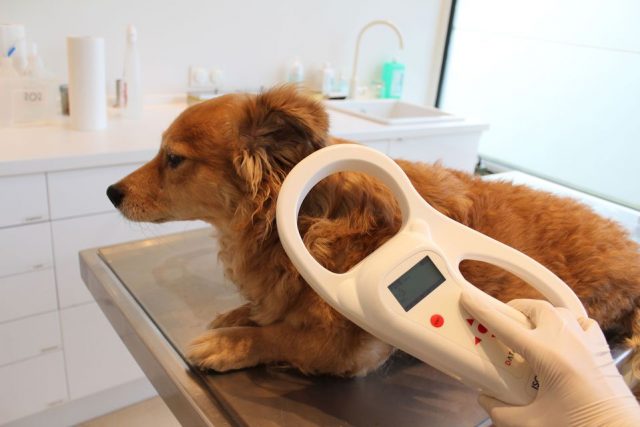 Pet microchips are increasingly common. The tiny, subcutaneous chips are recommended by vets and animal care experts as a way to make sure that lost pets find their way home again. But research suggests that despite their usefulness, pet microchips may cause cancer. Is the cost worth the convenience?

Microchips are an innovation that has saved thousands of pets from being rehomed or euthanized in shelters. A pet microchip is “about the size of a grain of rice,” according to microchip manufacturer 24PetWatch, and is marked with what is essentially a very small barcode that can be scanned just like the tags on grocery items. Each microchip is unique and can be used to identify a lost dog or cat even if the animal’s collar is missing.

Pet microchips are implanted just below the skin, between a dog or cat’s shoulder blades, using a tool similar to a hypodermic needle. Once it’s inserted, the chip stays there for the lifetime of the animal and can be used to identify the pet if it should be found on the street or turned in to a shelter.

If a wandering dog has an microchip, it’s easier for neighbours, veterinarians, and animal rescue groups to return the pet to the right people. Not only do shelters scan every animal they process and check chip barcodes against a pet database, a dog with an intact collar can be brought home by anyone who thinks to call the number on the microchip ID tag.

Although they are immensely useful and have been responsible for reuniting pets with their owners and families, there is a dark side to the microchip. Studies have linked pet microchips with increased incidence of cancer and tumors in mice and rats.

Microchip manufacturers claim the chips are completely inert. Although the chips use radio frequencies to signal their ID number to a microchip reader, they have no internal energy source and have been designed with a biocompatible casing that does not cause allergic reactions once it’s been inserted.

Despite these precautions, according to How Stuff Works writer Jane McGrath, a 2001 study found that 1% of rats with implanted microchips developed cancerous tumors near the chip. At least a dozen animal studies have been done between 1990 and 2007, most of which concluded that microchips significantly increase the risk of cancer at a site near the chip.

Most of these studies have been done on rodents, however, which prompts manufacturers to point out that research results cannot necessarily be correlated across species. 24PetWatch rebuts the worries over cat and dog cancers by concluding, “no evidence has been found that in any way demonstrates the existence of a correlation between microchip implantation and incidence of cancer in cats and dogs.”

Is the Cancer Risk a Reasonable Cost for Microchipping?

Although there is cause for concern, the studies that demonstrate a link between microchipping and cancer really aren’t conclusive, for several reasons:

The studies were mostly conducted on mice and rats

In cases where animals developed tumors at the site of implantation, there were usually vaccines administered in the same area

Trauma and inflammation at the site where the microchip is implanted could be responsible for tumor development, rather than anything inherent to the microchip

Microchips are responsible for restoring thousands of pets to their owners. They make identification immensely easier and save dogs and cats from being euthanized in shelters before their owners can find them.

It’s not easy, but deciding whether or not to microchip your pet has to be a personal choice, weighing the risk of losing your pet accidentally against the chance that a microchip might cause cancer in the long run.