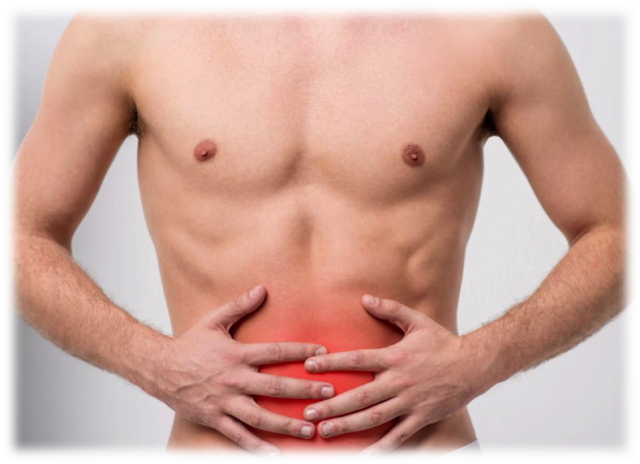 Irritable Bowel Syndrome (IBS) is a condition associated with changes in bowel habits that causes abdominal discomfort and pain. There are three subtypes: IBS-C is primarily associated with constipation, IBS-D patients have frequent diarrhea symptoms, and the “mixed” IBS condition goes back and forth between the two extremes. It affects about 5-10% of adults, primarily female.

More than 60% of patients with IBS report a worsening of symptoms for up to 3 hours after eating a meal. Large meals tend to cause more intense symptoms of intestinal gas, increased peristalsis (the moving of food through the intestine), and intolerance to specific foods. A Japanese study found that short-term fasting may help improve IBS symptoms.

At one time, lack of dietary fiber was believed to be the primary cause of Irritable Bowel. Recent studies have found that cereal, or insoluble, fiber worsened symptoms in over 50% of patients. Many physicians continue to prescribe soluble fiber supplements (for example, the psyllium in Metamucil), primarily for those who tend toward the constipation end of the spectrum, as this is still viewed as an effective treatment option.

Probiotics are live microorganisms that occur naturally in fermented foods such as yogurt, buttermilk and miso. Probiotics may be useful in the treatment of IBS symptoms.

Two natural ingredients are sometimes advised for treatment of irritable bowel: peppermint oil and turmeric. Peppermint oil is said to relax the smooth muscle of the intestinal tract, and may be useful for those with mild symptoms. Turmeric is a member of the ginger family, and its extract, curcumin, has anti-inflammatory properties. Unfortunately, studies have not found this treatment to be successful for the majority of patients.

Patients with IBS sometimes identify “trigger” foods for their symptoms. This tends to be more prevalent in female sufferers, and worsens with anxiety level. In clinical trials, the majority of patients who are fed “trigger” foods unknowingly, do not produce IBS symptoms, which may indicate that there is a psychological component at work.

True allergic reactions to foods account for very few IBS cases, but should be tested for if suspected. Gluten hypersensitivity, for example, can mimic the symptoms of IBS. Patients with celiac disease may actually be misdiagnosed as having irritable bowel, and adding wheat fibers to the diet in an effort to treat symptoms can have adverse effects.

Lactose intolerance seems to go hand in hand with IBS symptoms, but does not appear to be a cause of Irritable Bowel. A deficiency in the lactase enzyme causes similar symptoms, such as bloating, flatulence, abdominal discomfort, nausea, and loose stools.

Fructose and sugar alcohols also tend to increase symptoms, as these tend to be poorly absorbed carbohydrates. Fructose is naturally present in honey, fruits, fruit juices and table sugar, but the majority of the fructose consumed in the average American diet is that of high-fructose corn syrup found in soft drinks, breakfast cereals, baked goods and packaged convenience items. Sugar alcohols include sorbitol, mannitol, and xylitol. These are usually substituted for sugar in foods to reduce the carbohydrate content of a food for diabetes or weight control. Because they are not well digested in the gastrointestinal tract, high amounts ingested cause symptoms such as abdominal cramping and diarrhea.

IBS patients tend to have an increased intestinal sensitivity to high-fat diets, as this moves slowly through the intestine, causing abdominal discomfort.

Diet modifications for patients with IBS are individual – the same dietary treatments will not likely work for everyone with symptoms. Keep a journal to identify patterns of foods that trigger symptoms. Eliminate those foods for at least 2 weeks, and then slowly reintroduce one at a time to find the offending food.