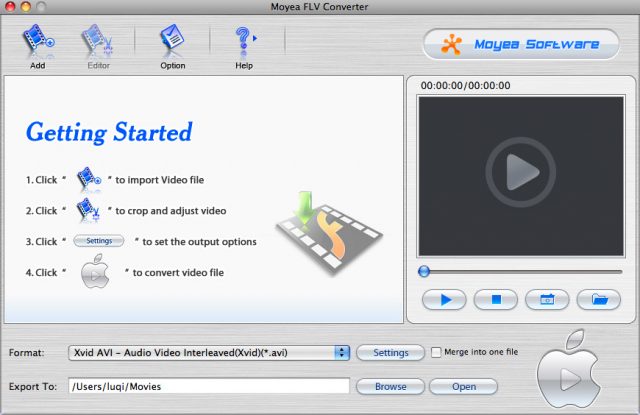 As a consequence of the popularity of streaming media file sharing sites such as zShare, a vast number of Flash to AVI video converters have sprung into being to allow users to convert FLV video to the more robust AVI format. A Google search of the phrase “flv video converter” returns over 7 million hits, and the results offer everything from free online FLV to AVI conversion to downloadable shareware for converting FLVs.

The main difficulty with many, if not the the majority, of these advertised FLV to AVI converters is that they are unstable, if they work at all, particularly when trying to convert larger Flash videos. This holds especially true for online sites that claim to convert Flash to video. Some, like the free Media-Convert website, are excellent for small FLV file conversion, but frustratingly still suffer severe server stability issues. It can be an annoying experience to watch an FLV conversion process to 99% only to hang at that point.

The obvious solution for consistent converting of FLV video to AVI video is to purchase a stand-alone application with a proven record. Moyea Software’s FLV to Video Converter Pro 2 is one such application.

FLV to Video Converter Pro 2 converts Flash video to a variety of video and audio formats. It supports conversion to AVI, MOV, WMV, MPEG, MPG, MP4 and MP3 from within a simple to use interface. The Flash video file to be converted can be dragged and dropped into the program, or loaded from the file menu and can then be converted at the press of a button into another format, or edited beforehand.

The built-in editor interface allows the user to crop and trim the FLV video, add text or image watermarks for the generated video file, adjust the file contrast, brightness and saturation, and apply a number of simple filter effects. While the Moyea FLV to AVI converter does not have the extensive editing functionality of a video editing program such as Virtual Dub, what it does have is the most reliable ability to convert Flash to AVI video on the market.

Converting FLV video to AVI in Moyea is achieved through Moyea’s built-in support of Flash codecs, including On2 VP6, Sorenson Spark, H263, MP3 and Nellymoser audio. Adjustments to the outputted video file can be achieved by adjusting the frame rate and size, bit rate and audio sample rate, and the overall file size and quality can be determined by applying third party codecs such as DivX and XviD.

The size of the AVI converted from an FLV file within Moyea can be of an extremely large size – up to several gigabytes for a feature-film length conversion from the original Flash video format. However, the conversion process is surprisingly swift, and the outputted quality is effectively lossless, with the resultant AVI conversion being of the same quality as the original FLV video. Running the converted AVI through a program such as Virtual Dub can reduce the overall file size significantly.

For Flash to AVI Convert to Moyea FLV Converter

With its elegant and intuitive interface, the Moyea FLV to AVI converter is so simple to use that a manual is hardly required for any user with even a passing knowledge of computer programs. That said, the software is supported by help files and tutorials, and Moyea have both an online support centre and a user forum which covers their software product range.

Moyea Flv to Video Converter Pro 2 is available from the Moyea website. The software retails for $29, which, for a robust and reliable solution for simple to achieve, consistent FLV to AVI conversion, is a bargain. For those not yet converted to Moyea’s excellent FLV converter, a trial version of the software is also available from the same site. The limitations are that any AVI converts from Flash files made in the trial version of the software are watermarked with the Moyea logo.