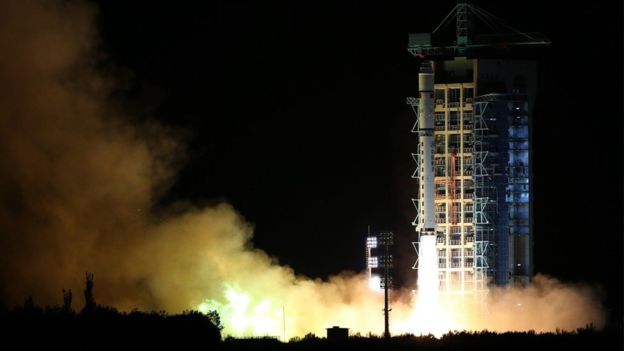 For the first time quantum-enabled satellite has been launched in the world and China has done it today blasting off from the Jiuquan Satellite Launch Centre.

Named as Micius, the satellite is said to be creating entangled photos to beam one half of each pair to Austria and China base stations.

Micius was the name of ancient Chinese scientist and philosopher.

One of the important properties of quantum satellite is “the observer effect,” but the quantum state cannot be observed without changing it. So, any interception would result with changing of the key. This will make it useless thereafter.

It is interesting to know the fibre-optic quantum key distribution networks currently are operational in Europe, United States and China.

Usually signals weaken up in the fibre-optic quantum technology over distance, but it is believed to be at minimum if those are sent mostly through space.

Besides, firing tiny sub-atomic particles is also a tricky part of physics as targets on the ground are across vast distances and also those should be travelling incredibly fast through space. However, it is good to know the project is the first attempt.

Lately China has allocated good budget for scientific research and is learned interested to be willing to take big risks even on unproven technologies.

Meanwhile, it is important to know the quantum computing is considered as the next big thing in communications.