Stevie Richards, whose real name is Michael Manna, is a professional wrestler who currently wrestles for Total Nonstop Action Wrestling (TNA). He is known as Dr. Stevie, and was a therapist for the troubled Abyss before he turned against him. Previous to his stint in TNA, Richards spent many years working for Extreme Championship Wrestling (ECW) and World Wrestling Entertainment (WWE).

Stevie, a wrestler called Nova, and the Blue Meanie formed a new, comedic faction in ECW that they called the blue World Order (bWo), a parody of the World Championship Wrestling (WCW) group new World order (nWo). Richards renamed himself Big Stevie Cool, after Big Daddy Cool, one of the nicknames for Kevin Nash when he wrestled as Diesel in the World Wrestling Federation.

Stevie Richards and The Blue Meanie

After briefly working for WCW, on August 1999, Richards joined the World Wrestling Federation. He rejoined his old tag team partner the Blue Meanie and they became a tag team once again. Their gimmick involved imitating other wrestlers, with Stevie imitating a Dudley, an Acolyte and Dude Love among others.

Stevie as Steven Richards and Right to Censor

Soon after, Stevie changed his name to Steven Richards and became leader of Right to Censor, a parody group based on the PTC, the Parents Television Council. Steven and others in his group took to kidnapping wrestlers and brainwashing them into joining the group. At its height, the RTC boasted the membership of Steven Richards, The Goodfather (formerly known as The Godfather), Ivory, Bull Buchanan and Val Venis. The group lasted several months before disbanding.

The goal of the RTC was to rid the World Wrestling Federation of all of its supposed filth and gratuitous violence. Steven Richards was the spokesman for the group, and frequently denigrated the state of the women in the organization, as well as the extreme rules of hardcore wrestling (which he had once been part of in ECW).

He gradually enlisted more people into his group, though they had no success in changing the minds of fans that liked scantily clad women and gratuitous violence. However, the group had success for itself in that The Goodfather and Bull Buchanan won the Tag Team Championship belts and Ivory won the Women’s Championship belt.

Stevie Richards as a Hardcore Champion

After the RTC disbanded, Steven soon after became involved in the WWE Hardcore title division. He first won the title from Tommy Dreamer on April 15, 2002, but he lost it to Bubba Ray Dudley on the same night. He won the title a total of 22 times, besting people like Crash Holly, Shawn Stasiak and even beating his old pal and nemesis Raven.

In 2002, Stevie affiliated himself with wrestler Victoria, who was working a psycho gimmick at the time. They frequently interfered in each other’s matches to help the other win, and had an onscreen romantic relationship. They also wrestled in mixed tag matches together. In 2004, he even dressed in drag and was known as “The Mystery Woman”, where he used his disguise to help Victoria win matches.

Stevie Richards as a Jobber

Throughout his last few years in WWE, Richards became a perpetual jobber, barely winning any matches, although he had a few wins against wrestlers such as Rene Dupree and Kevin Thorn. His last victory was against Mike Knox. Stevie Richards was released from his WWE contract on August 15, 2008.

On February 12, 2009, Richards debuted in Total Nonstop Action Wrestling as Dr. Stevie, the role he currently holds, and the therapist for Abyss. He also counseled female TNA performer Daffney. Dr. Stevie turned against Abyss and remains feuding with him. Raven joined TNA and allied himself with his former friend and enemy Stevie, and the two are working together to hinder Abyss from success in the company.

Although the career of Stevie Richards has not had as many victories or titles as those of other wrestlers, he is recognized as one of the main wrestlers of the original ECW. He is also known for his comedic roles in wrestling and his large role in the heel group Right to Censor. His wrestling career has taken many turns, and may yet take another.

Narrowboat Holidays on the Canals in England or Wales 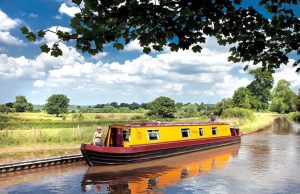 Lifestyle
Chugging steadily along through the constantly changing scenery on a canal holiday in England or Wales aboard a narrowboat is mixed with...

Is Hydroxycut a Safe Way to Lose Weight

What is Chi or Qi in Taoist Beliefs