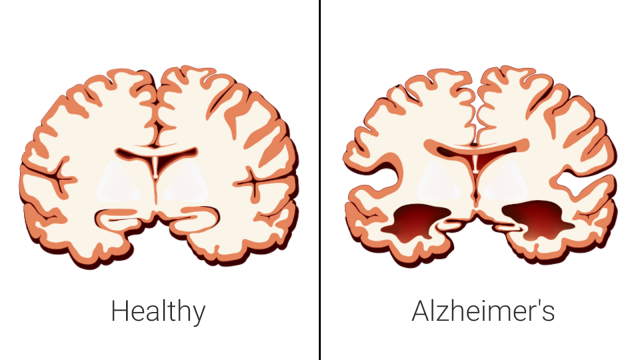 People who have weakened muscles are more likely to develop Alzheimer’s disease symptoms, according to a study published in the Archives of Neurology (Vol. 66. No. 11, November 2009). Researchers came to this conclusion after analyzing 900 seniors for their muscle strength. Their findings suggest that seniors with strong muscles are less likely to experience even mild memory loss that precedes the early Alzheimer’s stages.

However, researchers say more studies are needed before they can conclude that having weak muscles actually causes Alzheimer’s. What they are saying is that weakening muscles may be the first indication that a person is in the early Alzheimer’s stages and that mental decline is a symptom that occurs later as the disease progresses. In other words, weak muscles may be a symptom of Alzheimer’s rather than a cause.

Researchers theorize that Alzheimer’s is caused by the build up of plaque which erodes the brain. Neurological damage caused by strokes are also thought to be another Alzheimer’s cause. Researchers are recommending that seniors get checked for muscle strength to determine if they are at risk for developing Alzheimer’s disease symptoms.

Although weight lifting may not prevent mental decline, senior exercise routines involving aerobics are effective in helping the brain maintain its ability to function properly, according to the Association for Psychological Science. The organization notes that multiple studies provide overwhelming evidence that regular exercise helps preserve short term memory, improves the ability to focus, and supports a person’s ability to make decisions.

Researchers believe that exercise stimulates the production of FGF-2, which helps the brain produce new neurons. This growth hormone also reduces stomach fat and improves over all functioning of the brain. Even modest exercise can be effective in reducing a person’s risk for developing Alzheimer’s symptoms. According to the Alzheimer’s Association, 30 minutes of daily physical activity is enough to increase blood circulation and increase the production of new brain cells.

The Alzheimer’s Association recommends that seniors regularly participate in aerobic activities such as gardening, yoga, walking, dancing, and step climbing. This will help speed up their heart rate and improve their intake of oxygen. All of this helps prevent the loss of brain cells as a person ages. Staying active also helps seniors remain mentally alert.

A healthy diet is also an important part of dementia prevention. The Alzheimer’s Association says certain foods can help keep the brain healthy and lower a person’s risk for Alzheimer’s symptoms. This includes dark colored fruits and vegetables such as spinach, beets, Brussels sprouts, prunes, blackberries, strawberries, and cherries. Other brain foods include fish that are rich in omega-3 fatty acids, such as salmon and mackerel. Walnuts and almonds are also good for the brain.

Coffee and the Mind