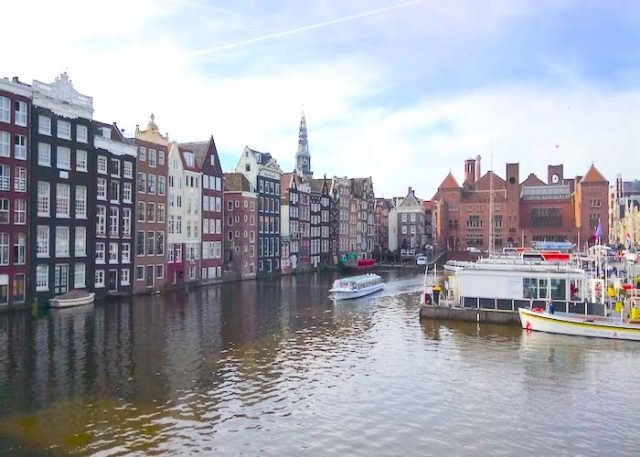 Amsterdam is relatively compact and easily navigated. Start your day by travelling Dutch style – mingle with the masses by hiring a bike for the weekend. The Netherlands are famously flat, so you don’t have any hills to worry about. Yellowbike Hire (Nieuwezijds kolk 29) is located just three minutes walk from Amsterdam Central Train Station and will provide you with a bicycle and two locks for 48 hours for only 18€.

Ride back towards the centre of Amsterdam and acquaint yourself with the city’s namesake, Dam Square, the former site of the Amstel River Dam, which was built in 1270. The west side of the square boasts the grand 17th century Royal Palace (formerly the City Hall) and the centre space is often home to colourful street artists and performers.

Start heading south down Rokin and make a right onto Singel. All along this pretty canal-side street, you will find the famous Bloemenmarkt – Amsterdam’s busy flower market, with a picturesque backdrop of tall, thin, bright coloured buildings and cosy canal house boats.

Make a stop at one of the many coffee shops in the area before you start heading north again. Highly recommended is De Dampkring (Handboogstraat 29, off Singel) – made famous by George Clooney and Brad Pitt in Oceans 12. If you head north on Spuistraat, you’ll find many examples of clever, quirky street art, before turning left onto Raadhuistraat. There are plenty of photo opportunities looking down Amsterdam’s beautiful canals when cycling in these parts.

Spend your afternoon in one of Amsterdam’s poignant treasures, Anne Frank House, located just off Westermarkt, on banks of a canal. The house where Anne, her family and friends hid during World War 2, serves as a memorial to her touching story and her tragic life. Spending some time here is a difficult, yet inspirational experience.

Head back towards the centre of the city for the evening and grab a bite to eat. Restaurant Haesje Claes on Spuistraat, has a warm, rustic interior and specialises in Dutch cuisine. Then, spend the rest of your evening wandering around Amsterdam’s famous red light district, spotting regal swans floating on canals lit up by neon night lights, or relax in one of Amsterdam’s coffee houses – The Green House at 191 Oudezijds Voorburgwal is very highly recommended; it’s interesting dim lit interior, and artful mosaics and marble create an ambient and comfortable atmosphere.

Make your way to Albert Heijn supermarket at 18 Nieuwmarkt in the centre of the city to grab a few dutch treats for a picnic lunch – stroopwaffles, and dutch cheese and bread are musts!

Then, take a leisurely cycle south west, to Museumplein – the site of Amsterdam’s cultural hub. Spend the morning meandering around one or more of the four prestigious museums in the area; Rijksmuseum (dedicated to history, arts and crafts) The Van Gogh Museum (very highly recommended), Stedelijk Museum (classic, modern and contemporary art) and the Diamond Museum.

Just beyond Museumplein is Vondelpark – find a quiet spot somewhere in the 120 acres of tranquil green space to rest your weary legs and enjoy your picnic. The Netherlands Filmmuseum is also located in the park, inside a stately 19th century pavilion and is well worth a look and if you happen to visit in summer, you may catch an open air film screening.

Now head East, and at Stadhouderskade 78 you will find The Heineken Experience. The famous dutch brewery offers a tour of the brewing process, interactive displays and beverage tasting. Tickets can be purchased online beforehand, to avoid lengthy cues.

Following this, you may like to take an afternoon cruise along Amsterdam’s canals. Amsterdam Canal Cruise company is located opposite The Heineken Experience, on Nicolaas Witsenkade. You’ll see more of Amsterdam’s majestic buildings and house boats bursting with personality as the sun goes down – a great way to bid farewell to the city and recover from all that cycling…

Why To Visit San Antonio, Texas 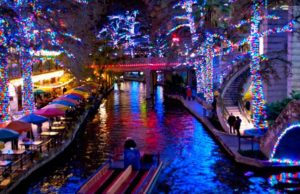 Lifestyle
For people who are interested about learning about the past and enjoying what the present offers; San Antonio, Texas is the place to be....

Free Things to Do in Chicago