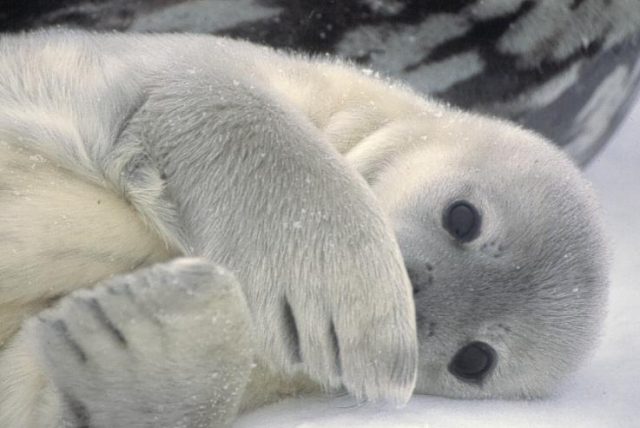 Permanently covered by ice and devoid of trees or shrubs, Antarctica provides a harsh environment for any land based creature to live in. However, the waters just off the coast contain one of the most productive ecosystems in the world; and the nutrient rich ocean supports a wide variety of interesting and bizarre looking creatures.

The most abundant of all the animals that live in Antarctica, krill are an important part of the South Pole’s ecosystem. Although small – they grow no more than 6 centimeters long – these shrimp like creatures are abundant enough to feed the whales, seals, fish, and other animals that live in Antarctica. In fact, the mass of all the Antarctic krill (Euphausia superba) in the world would outweigh that of any other species according to the book Antarctica: Secrets of the Southern Continent by David McGonigal.

Krill congregate in large swarms which make them easy to eat – one swarm can include 30,000 individuals in a single cubic meter. These swarms are so dense that when close to the surface they turn the sea a brick red colour, according to McGonigal. Further, although a group of these Antarctic animals can vary in size, superswarms can cover hundreds of square miles.

Antarctica animals include several types of fish – some of which may be found on a human dinner plate and some of which are biological anomalies. The Patagonian toothfish (Dissostichus eleginoides) is an Antarctic animal that makes such a tasty meal it is now at the point of being over-fished according to the British Antarctic Survey’s (BAS) website.

It is unfortunate that people don’t take more interest in Antarctica’s marine life as these creatures are so unique. According to the BAS the icefish, named for its pale coloration, is the only vertebrate to have no red blood pigment. Further, there are about 120 species of antifreeze bearing fish around Antarctica. According to the New York Time’s Sean Carroll in “When Built in Antifreeze Beats a Winter Coat”, Antarctica’s fish have proteins that are able to bind with ice crystals in the water and prevent ice formation in the gut.

An Abundance of Antarctic Animals in the Ocean

The variety of Antarctic wildlife living in the South Pole’s frosty oceans may be surprising. The December 2009 BAS news story “New pictures reveal rich Antarctic marine life in area of rapid climate change” documents creatures as varied as octopi, giant sea spiders, skates, sea stars, comb jellies and crustaceans. Many of these creatures were seen by scientists performing trawls in the Bellinghausen Sea in West Antarctica.

Perhaps even more surprising are Antarctica’s coral reefs. Lacking the popularity of their tropical cousins, cold water corals do exist. According to the Australian Antarctic Division in their article “Carbon dioxide raises dead zone” scientists have found these Antarctic animals at 800 meters depth on the edge of the Antarctic continental slope. Unfortunately, rising carbon dioxide levels have made the ocean more acidic, threatening the delicate composition of these corals.

Many fascinating creatures live in Antarctica’s waters, but of course there are some that are more popular than others. Marine mammals such as whales and seals are well loved, easy to photograph, and easy to see from an Antarctic cruise. The Southern Ocean is home to a wide variety of whales according to McGonigal, including sperm whales, minkes, right whales, and others. There is also of course that famous dolphin, the orca – also known as the killer whale.

According to BAS there are 6 species of seal living in and around Antarctica. The Leopard, Ross, Weddell, and Crabeater seals all breed on sea ice in the spring. Antarctic fur seals and elephant seals tend to stay north of the pack ice zone, colonizing the beaches of Antarctica’s outer-lying islands.

A list of animals that live in Antarctica would be incomplete without mentioning penguins. Several species of penguins live on the islands surrounding Antarctica but only two truly call the continent home according to BAS. These are the Adelié and the Emperor penguin. Only the Emperor penguin however, is able to handle the harshest of Antarctic winters and breeds further south of any penguin species – tolerating temperatures as low as -50°C.

Although penguins are perhaps the most popular of the Antarctic animals – other birds also call the area home including albatross, skuas, terns, and petrels. Appreciating Antarctica’s rich biodiversity however sometimes means looking below the sea’s surface and taking note of those Antarctic animals which are strange and unique.

How to Create a Local Band That Makes Money