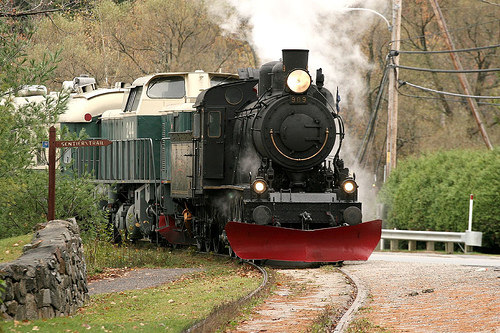 To mouth a cliché, yes there is always a vintage romance that wraps itself around a steam locomotive. More so since it is the last of its kind that is active in Canada. This is the Hull-Chelsea-Wakefield (HCW) Steam Train that makes its excursion-on-rails from the city of Gatineau (former Hull) to Wakefield via Chelsea from May to October. It winds its way through a 64 kilometer route that straddles the picturesque Gatineau River on one side and the varied landscape of the Gatineau Park on the other. The gentle chug at a leisurely speed of 24 kilometers an hour is akin to the rhythmic lull of heartbeats.

The interior comprises of a table for four set near panoramic windows. Bilingual tour guides narrate the story of the steam train as well the highlight points along the route. A team of two guitarists and a fiddle player entertain the passengers as the train travels on what was once known as the Gatineau Railway Line built between 1890 and 1903. In those times this railway line served as a means of lumber transportation from Ottawa to Maniwaki, Quebec. The railway never got completed due to lack of funds and ceased functioning in 1963.

The concept of reinventing the steam train into a tourist train was the brainchild of a private and public consortium in 1992 and the community’s desire to preserve the railroad heritage. A local businessman, Jean Gauthier, bought the train and set in motion a tourism-on-rails venture that opened up a world of possibilities.

The nine car train has a capacity to seat 504 passengers. Today, about half a million passengers have traveled on this route to discover the splendor of the Outaouais region of Western Quebec. These include both local visitors as well as international groups from the United States, France, Italy, Germany, Japan and Korea.

At its destination at Wakefield, the 93-ton steam engine is rotated on a manual giant turntable to face the opposite direction on its way back to Gatineau. During the two hour stopover in Wakefield, tour guides offer either a tour of the steam engine or the village.

The Steam Train provides several packages to suit the needs of the tourists. The Scenic Excursion is a 64 kilometer roundtrip along the banks of the river and through one of Canada’s magnificent natural reserves. The Sunset Dinner package that accommodates 440 guests per departure includes a four-course meal that ranges from chicken stuffed with wild mushroom or a choice of filet mignon of Canadian beef, salmon filet with citrus chutney, Spanish rice and seasonal vegetables, crepe stuffed with squash, a platter of Quebec cheeses and a maple syrup mousse cake. The Fall Foliage tours is one of the most spectacular trips as the train journeys through a blaze of resplendent colors that is the best feature of the Gatineau Hills. The Club Riviera excursion offers either a half-day rail tour or a sunset dinner experience in the stylish period coach.

The history of the Steam Engine dates back more than a hundred years and has a Swedish link. Steam Engine No. 909, the ninth locomotive in the 900 series was built in 1907 by Statens Jarnvagars (SJ) the Swedish rail authority. It served passengers in Sweden especially the arctic zone until 1945. The country phased out its steam engines when its railroad system became electrified. But when Sweden feared an intensifying of Cold War tensions over Europe, the 909 was warehoused along with 200 other working steam engines. This move was a safety backup measure in the event that an enemy attack would paralyze its electric railway system. The 909 was housed in a barn covered in a plastic tarp to protect it from humidity till 1988. As the Cold War eased, Sweden decided to sell its steam locomotives. Around the same time a plan for a tourist train venture was being discussed in Canada’s National Capital Region. Need and supply was met . The 909 engine, the diesel locomotive and nine passenger cars began its sea-bound journey to Canada’s shore. It weathered the violent stormy seas and made it to the port of Montreal in June 1992.

With all its checkered past and the looming possibility of a shut down of its operations in 2008, the popularity of the vintage locomotive 909 is still full steam ahead. According to the Outaouais Tourism, the train brings 50,000 to 60,000 tourists into Wakefield each year generating a revenue close to $10 million.

All About Your Baby’s Eye Color – How To Predict Your... 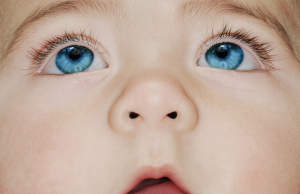 Health
Whenever a new baby is born the thing that generates the curiosity of each parent is the eyes color of the baby. We can...